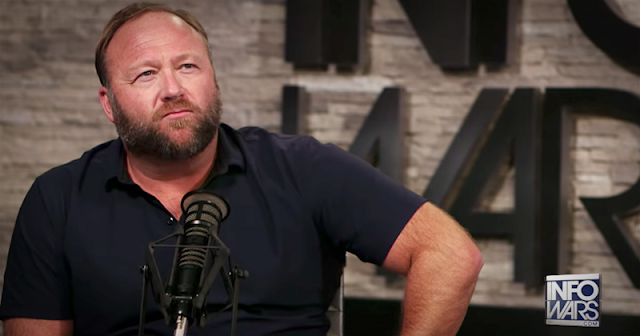 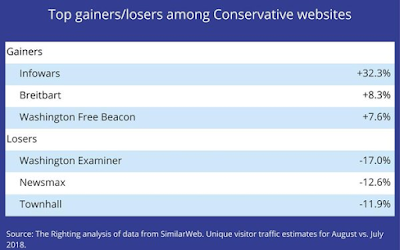 Comment: These numbers completely debunk the New York Times’ September 4 claim that Infowars traffic plunged.
Despite — or maybe because of — being blacklisted from the major social media platforms, traffic to Alex Jones’ Infowars.com spiked in August, according to an analysis of monthly visitor data to major conservative websites released this morning by watchdog The Righting.

Infowars site traffic surged by a third in August vs. July, representing the largest gain of any leading conservative site, according to The Righting President Howard Polskin.
“I think the massive media coverage created enormous brand awareness and drove people there,” Polskin said, adding, “I don’t think that it’s as dependent on social media as one might think.”
Read more.

"I'm all news all the time. Full power, tall power. I want to break in when news breaks out. That's my agenda. Now respectfully, when you start talking about a liberal agenda and all the, quote, 'liberal bias' in the media, I quite frankly, and say this respectfully but candidly to you, I don't know what you're talking about."

Linda Chavez, Center for Equal Opportunity: "If your someone like me, who lives out in a rural area - if someone breaks into my house and wants to murder or rape me or steal off of my property, it'll take half an hour for a policeman to get to me ....Thousands of lives are saved by people being able to protect themselves(armed)."

Bonnie Erbe, host and former NBC Radio/Mutual reporter:"And if you look at the statistics, I would bet that you have a greater chance of being struck by lightning, Linda, that living where you live, and at your age, being raped. Sorry."

AND LEST WE FORGET, IN MEDIA, THE MEANS JUSTIFY THE END RESULT.

"He [Ted Kaczynsky] wasn't a hypocrite. He lived as he wrote. His manifesto, and there are a lot of things in it that I would agree with and a lot of other people would, that industrialization and pollution are terrible things, but he carried it to an extreme, and obviously murder is something that is far beyond any political philosophy, but he had a bike. He didn't have plumbing, he didn't have any electricity." (Italics mine for emphasis)