Baltimore Ravens players, including former player Ray Lewis, second from right, kneel down during the playing of the U.S. national anthem before an NFL football game against the Jacksonville Jaguars at Wembley Stadium in London, Sunday Sept. 24, 2017. Courtesy Matt Dunham AP Photo
Entertainment 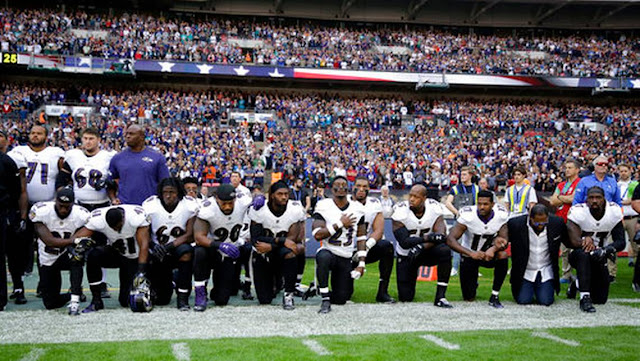 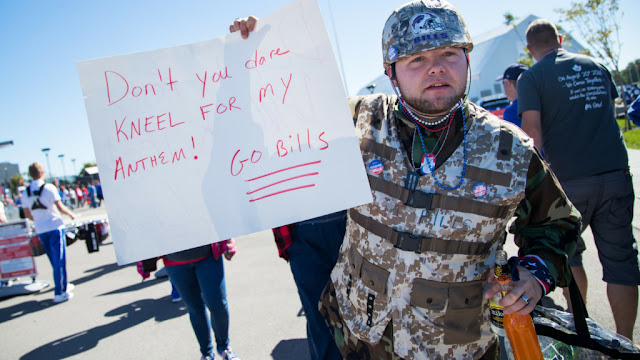 Millions of people tune in on any Sunday, Thursday or Monday during NFL season to watch a game. In 2014, about 205 million viewers watched part or all of an NFL game.

According to a recent internal memo from the NFL, the numbers have dropped. The memo addressed the league’s concern about declining viewership, stating that as of Week 4, ratings were down by 11 percent.


Do you know the history of the star spangled banner? It's time that you learn!!


AMERICA: YOU HAVE BEEN WEIGHED IN THE BALANCE AND FOUND WANTING!


YOUR DAYS ARE NUMBERED AS A FREE AND SOVEREIGN COUNTRY


When NFL football players disrespect the singing of the national anthem by kneeling they disrespect every person who died fighting to keep America Free. This disrespect is a sign of a deeper problem, the cancer of political correctness and divisiveness the globalist have instituted through their minions to enslave us by fighting with each other while they divide and conquer our great land by passing unjust laws and unjust supreme court rulings.

This lack of respect signals a tipping point. If we as a county accept this behavior and do not decry this outrage then we are on the path to totalitarianism. Donald Trump is absolutely correct in his analysis of their behavior. If they don't respect our flag or national anthem or appreciate their 7 figure income they receive because they live in a free country they can go to North Korea where they will get a taste of how the other half of the world lives and enjoy the many benefits of communism such as starvation and execution.

This lack of respect is a symptom of taking references to God out of pubic life(removal of prayer from public schools), murdering the innocent(abortion) to give just a few examples.

I am now reading a book "The Cost of Our Silence" by David Fiorazo. In this book David states:


A few years ago, I read a powerful book, Fire Breathing Christians by Scott Alan Buss in which he emphasizes this fact: Whenever God is removed, someone or something has to take its place.(1)

Alan Buss writes about how German society was changed by Hitler marginalizing the Jewish German citizens to create the master human race which lead to the death camps such as Auschwitz for the Jews. I see many parallels between his analysis and the take down of America by the Globalist Elite Technocrats.


"I now know that it is a relatively simple and easy thing to define the inconvenient or unattractive life out of existence"(...fetus not defined as a human life until born...my analysis) "figuratively and rhetorically so that it might one day be done away with literally"(abortion= murder; in Germany it was the Jews). "I now know that a nation that is Christian in name only is no further from hellish barbarism than that which openly professes allegiance to a pagan god or no god at all." (Hitler was involved in occultism....ed.)

I now know that the paths of historic Germany and contemporary America are founded on a solid, clear, and powerful line of logic. It all begins with one simple, all-encompassing and worldview defining principle: There is no God(2)( ...italics mine for emphasis.)


America has not been far behind Europe in many aspects of society. If there were ever a time for Christians to shout from the rooftops and warn others, that time is now.(3)...emphasis mine..ed.)


It is un-American to bend the knee to a foreign power. The members of the Ravens and Jaguars who stood with their hand over their heart when God save the Queen was played at Wembley Stadium in London, but kneeled when the American national anthem was played, should be fined or fired or they can all go live in North Korea! Men paid with their very lives to give us the freedom that no other country has. They totally disrespect that price.

The answer: burn those NFL tickets, refuse to attend any NFL games. Hit em where it hurts- in their pocket book! Total Boycott!!

I am an American. I bow or bend the knee to no one except my Lord and Savior Jesus Christ who paid the ultimate ransom(his own human life) that I might live with him into eternity.