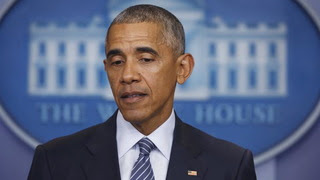 Among the options for dealing with Iran are sanctions - which have had some limited effect on the economy there- and regime change, which is not the policy of the Obama administration. This was made patently obvious in 2009. President Obama had a legitimate chance to support change for good, but he turned a blind eye to the freedom seekers who took to the streets of Tehran to protest Ahmadinajad's debatable presidential victory. He had the opportunity to respond vigorously in support of the Iranian people, but failed to do so, and his silence was most telling. As Iranians risked their lives, Obama took a neutral stance. Dante Alighieri, "The hottest places in Hell are reserved for those who, in time of great moral crisis, retained their neutrality."

It seemed that President Obama was determined to remain aloof to the cries of people of Iran in favor of doing nothing in what appeared to be an attempt to preserve the possibility of negotiating with the very man who holds the Iranian people under his thumb - Ayatollah Ali Khamenei.

The young men and women of Iran who stood up to Ahmadinejad and had their votes stolen waited eight days before President Obama finally issued a statement. Even then, he offered no hope of any kind to the protesters. Did President Obama understand men and women weren't willing to lay down their lives simply for a vote recount; but they were willing to lay down their lives for the right to be heard, for the right to life, liberty, and the pursuit of freedom? They were not protesting faux ballots; they were protesting the despotic limitations imposed on them by the tyrannical clerics who really run the country.

The Islamic Republic in Iran was exposed as a fraud. If President Obama could not use diplomacy to support democracy, any hand he might extend to Iran's ruling mullahs had better have a whole log of baksheesh (bribery money) in it.

According to Education Views website, Mr. Obama's reputation in Arab countries has suffered:


Despite intense and sustained efforts to woo the Arab world with money and nice words, a newly-released survey of the region finds that President Obama is at the bottom of a list of Arabs admire most. Obama is admired by just 4 percent of Middle East Arabs in the new survey released by Brookings Institution and University of Maryland. Above him:

And when asked if there could be just one superpower, who would they like it to be, Arabs snubbed Obama again. The top choice, with 22 percent, was China....the United States came in at 7 percent.(1)

Another defining moment of the Obama Presidency came when he directed the decision by the United States delegation to the United Nations to abstain from a United Nations Security Council resolution condemning Israel over its settlements on the West Bank reversing 6 years of the previous U.S. policy in regards to Jewish settlements on the West Bank.

The United States vetoed a similar resolution in 2011, which was the sole veto cast by the Obama administration at the security council. 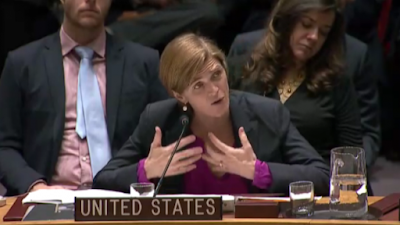 EPILOGUE
Trumps Response the U.N. coincides with mine:

This blog is not affiliated with www.christianobserver.org
Posted by steve at 8:26 PM