TWAS THE NIGHT BEFORE CHRISTMAS, WHEN ALL THRO' THE HOUSE, NOT A LIBERAL WAS STIRING, NOT EVEN A MOUSE!

Twas the night before Christmas, when all thro’ the house,
Not a liberal was stirring, not even a mouse;
The stockings were hung by the chimney with care,
In hopes that Donald J. Trump would soon be there;
children were nestled all snug in their beds,
While visions of justice danced in their heads,
And Mama in her ‘kerchief, and I in my cap,
Had just settled our brains for a long dumbed-down nap-
Go to sleep, Mama said, for there's nothing to fear,
The lying liberals are on the run when Donald J. Trump is near.
When out on the lawn there arose such a clatter:
It was Donald J. Trump discussing the matter.
I sprang from the bed to see what was up.
Away to the window I flew like a flash,
Tore open the shutters, and threw up the sash.
The moon on the breast of the new fallen snow,
Gave the lustre of mid-day to objects below;
When, what to my wondering eyes should appear,
It was Donald J. Trump brimming with cheer.
He was singing MERRY CHRISTMAS to all who would hear!

More rapid than eagles his coursers they came,
And he whistled, and shouted, and call’d them by name:
“Now! Jones, Now! Savage, Now! O Keefe, and Farah,
“On! Pence, On! Bannon, On! Priebas and Carson."
“To the top of the porch! to the top of the wall!
“Now dash away! dash away! dash away all!”
So up to the house-top the coursers they flew,
With the sleigh full of justice for all those who knew.
And then in a twinkling, I heard on the roof
The prancing and pawing of each little hoof.
As I drew in my head, and was turning around,
Down the chimney St. Trump came with a bound:
He was dress’d all in fur, from his head to his foot,
And his clothes were all tarnish’d with ashes and soot;

The long hard- fought battle had taken its toll. But he was on top, and had stolen the show.
A bundle of promises was flung on his back,
He look’d like a peddler just opening his pack:
His eyes - how they twinkled! his dimples how merry,
His cheeks were like roses, his nose like a cherry;
No more fake news they will tell us he said,
or we will sing MERRY CHRISTMAS to them once again.

To hell with fake news President Donald Trump said,
We'll speak the truth and expose the lies and make America great once again.

When out of his sack, he pulled out a list,
of people with corruption he said with a twist,
Justice for Clinton and Obama he said,
we'll remember White Water, Scolia, Foster, Benghazi and emails et all.,
political corruption will end now! once and for all !
Drain the swamp, clean up the mess, I will promise you to do my best.

His droll little mouth was drawn up like a bow,
And the beard of his chin was as white as the snow;
The stump of a pipe he held tight in his teeth,
And the smoke it encircled his head like a wreath.
He had a broad face, and a little round belly
That shook when he laugh’d, like a bowl full of jelly:
He was chubby and plump, a right jolly old elf,
And I laugh’d when I saw him in spite of myself;
A wink of his eye and a twist of his head
Soon gave me to know I had nothing to dread.

Announcements with Ford and Carrier, and promises of more work; then turn’d with a jerk,
And laying his finger aside of his nose
He sprung to his sleigh, to his team gave a whistle,
And away they all flew, the momentum was so great that the liberals went faint.
They could scarcely believe it, that he moved so fast, they were left to ponder and wonder at the next thing he said,
But I heard him exclaim, softly when out of sight. No more fake news or there will be a fight!

EPILOGUE
MERRY CHRISTMAS TO MY POLITICALLY CORRECT FELLOW AMERICANS!
(If Merry Christmas offends you, you can always leave!)
You can try and take Christmas from America but you will never take Jesus Christ out of my heart. The soul of America has awakened. Liberals, Progressives, Socialists, Globalists: beware! 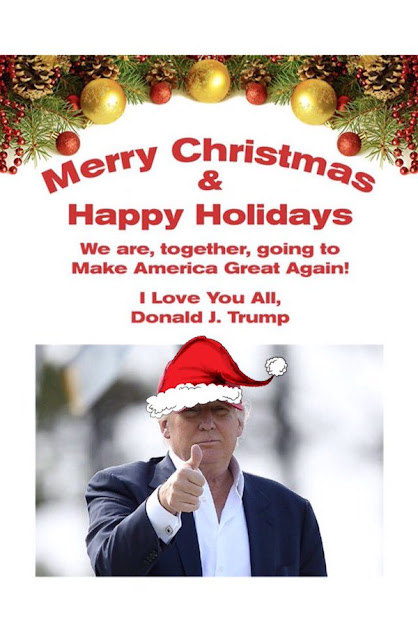 This blog is not affiliated with www.christianobserver.org
Posted by steve at 4:51 PM