The University of Missouri is offering free counseling to anyone triggered by Donald Trump tweeting Infowars. #TheTriggering

The spiritual war for the heart and soul of this nation continues.


TheChristianObserver.blogspot.com
This blog is not affiliated with www.christianobserver.org.
Posted by steve at 8:49 PM No comments:

Paris, the Latest In a Long Line of False Flag Events. 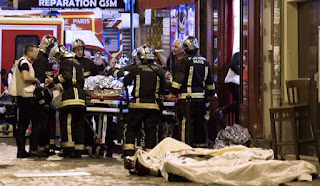 Tragedy strikes Paris at the hands of Muslim immigrant extremists.
When one wants to determine if an event is real or it represents a false flag attack, one only needs to look at what emergency services, local law enforcement or the military is doing leading up to the attack.

Such drills leading up to a false flag attack will actually consist of the specific chain of events that would actually take place during an actual attack of a similar nature.

There is usually one hallmark characteristic of a coming false flag event. Namely, the powers-that-be conduct drills that are identical to the tragic event. From Hitler to the U.S, government the story is always the same.

It is widely known that the Nazis, in Operation Himmler, faked attacks on their own people and resources which they blamed on the Poles, to justify the invasion of Poland. The Nazis set fire to their own parliament, the Reichstag, and blamed that fire on a communist sympathizer. The Reichstag fire was the watershed event which justified Hitler’s seizure of power and suspension of liberties.

Webster Tarpley produced damning documents in his book 9/11 Synthetic Terror: Made In The USA, in which Tarpley documented, at minimum, 46 drills that were underway in the months leading up to 9/11 and some of which were actually happening on the very morning of the attack.

In a similar vein, the 7/7 bombings in London witnessed authorities carrying out anti-terror drills which were identical to the actual events the day of the bombing precisely at the same times and locations.

With regard to the Boston Marathon Bombing, an NBC affiliate, WPMI-TV Channel 15 in Mobile, Alabama, interviewed Ali Stevenson, the University of Mobile’s cross country coach, who was near the finish line of the Boston Marathon when a series of explosions went off. Stevenson recalled thinking that he thought it was very odd that there were bomb sniffing dogs at both the start and finish lines.

In a stunning revelation, the cross country coach said he saw law enforcement spotters on the roofs at the start of the race. In the interview, Stevenson stated that he had been in many marathons in major cities (e.g. Chicago, D.C, London, etc.) but had never seen that level of security before. Just another bizarre coincidence?

In Boston, there were bomb drills held in conjunction with the Boston Marathon bombing.

The following six minute video is worthy of viewing as it ties together many of the events connected to the Paris false flag attacks. Always remember to ask this question. Who benefits? This will reveal who is usually behind the terror attack and as we have seen it is quite often a government that wants to take away it's citizens rights and civil liberties at home or is used to justify invading another country(The Gulf of Tonkin Incident used to justify the invasion of Viet Nam by the United States, Operation Northwoods used to justify an invasion of Cuba by the United States)

EPILOGUE
"If tyranny and oppression come to this land, it will be in the guise of fighting a foreign enemy.” .....James Madison

The foreign enemy: Muslim extremists. The terror attacks: to strip us of our will to resist government tyranny and oppression; to be used to justify removing our civil liberties and right to self defense; to bring in UN troops to subjugate the population who will resist being under a world government; and the invasion of Syria to take down Assad since the U.S. has been unable to do this to this point.

Will terror attacks come to America? They will according to Henry Kissinger.


"Today Americans would be outraged if U.N. troops entered Los Angeles to restore order; tomorrow they will be grateful! This is especially true if they were told there was an outside threat from beyond whether real or promulgated, that threatened our very existence. It is then that all peoples of the world will pledge with world leaders to deliver them from this evil. The one thing every man fears is the unknown. When presented with this scenario, individual rights will be willingly relinquished for the guarantee of their well being granted to them by their world government."
- Henry Kissinger in an address to the Bilderberger meeting at Evian, France, May 21, 1992. (As transcribed from a tape recording made by one of the Swiss delegates.)

My friends, this is only the beginning of what the Fascist, Globalists are planning: to bring on the clash of civilizations that Albert Pike, celebrated American Civil War Hero and head of the Ancient and Accepted Scottish Rite of Freemasonry, spoke about in a letter to Giuseppe Mazzini, head of the P2 lodge in Italy in 1871.

The coming clash of civilizations as predicted by Mazzini and Pike in 1871 will result in the Third World War originating in the Middle East between the Muslims and the Jews exhausting the battle wearied nations into accepting any proposal as long as it promises peace uniting the entire world under the fatal banner of the Luciferian New World Order. [Aleister Crowley, Magick in Theory and Practice (New York: Samuel Weiser, 1913),159, in Decker, p.210 as quoted in Tedd Flynn, Hope of The Wicked, The Master Plan to Rule the World (Sterling, Virginia: MaxKol Communications, 2000), p.72.]
TheChristianObserver.blogspot.com
This blog is not affiliated with www.christianobserver.org.

Praise Him. Let All The People Praise Him!


"Anyone with ears to hear should listen and understand. Anyone who is destined for prison will be taken to prison. Anyone destined to die by the sword will die by the sword." Revelation 13:9-10 NLT.

But whatever the outcome of your life in worldly terms it is mean't to demonstrate His glory. Let Jesus Christ rule in your heart and mind. Make Him Supreme; That is your destiny as His child. He is the potter; you are the clay. You are his workmanship, His glory. For he created you. You are His chosen vessel to bring salvation to those who will listen while there is still time, for the end of all things is near.


I press on to take hold of that for which Christ Jesus took hold of me. Brothers, I do not consider myself yet to have taken hold of it. But one thing I do: Forgetting what is behind and straining toward what is ahead, I press on toward the goal to win the prize for which God has called me heavenward in Christ Jesus. Only let us live up to what we have already attained. Philippians 3:12-14, 16 NIV.

Honor Him and he will honor you! Praise His Holy Name! Hosanna, The Lord of heaven and earth be praised!

Labels: Hoshiana, How Great Is Our God, Joshua Aaron

Video: Ben Carson Blasts the Media Over Obama’s Hidden Past

Give EM Hell Ben. Hold their feet to the fire!! Finally a man exhibiting the proper political correctness in accordance with the American founding fathers! What a breath of fresh air.

He's got the globalist, progressive, socialists and the lapdog media on the run! The presstitutes better strap on a seat belt for the ride as they get buffeted by concerned Americans for the truth!


TheChristianObserver.blogspot.com
This blog is not affiliated with www.christianobserver.org.
Posted by steve at 10:40 PM No comments: