THE DAY THE INTERNET DIED 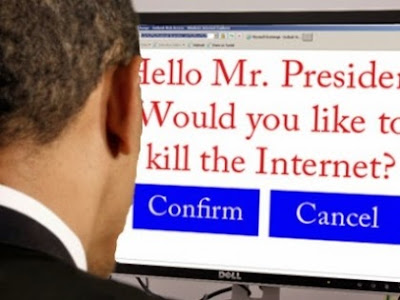 Today February 26, 2015 marks the death of the internet as we know it. Today the Federal Communications Commission voted in secret to reclassify the Internet as a public utility under Title II of the Telecommunications Act.


Net neutrality advocates quite literally danced in the snowy streets today outside the Federal Communications Commission in Washington just before the agency voted to approve the strongest ever rules on net neutrality.

The vote marks the culmination of a yearlong struggle that pitted grassroots Internet advocates and Silicon Valley tech giants against the titans of the telecom industry.

The FCC’s vote is considered an historic victory for so-called Open Internet advocates, and a major blow to big Internet service providers, such as Comcast and Verizon, which will now be subject to stronger regulations.

Crucially, the FCC’s new rules were designed to give the agency explicit legal authority to regulate broadband Internet providers by reclassifying broadband under Title II of the federal Communications Act.

Ron Paul had this to say:


Today the Federal Communications Commission (FCC), a non-elected federal government agency, voted three-to-two to reclassify broadband Internet as a common carrier service under Title II of the Communications Act. This means that – without the vote of Congress, the peoples’ branch of government – a federal agency now claims the power to regulate the Internet. I am surprised that even among civil liberties groups, some claim the federal government increasing regulation of the Internet somehow increases our freedom and liberty.

The truth is very different. The adoption of these FCC rules on the Internet represents the largest regulatory power grab in recent history. The FCC’s newly adopted rule takes the most dynamic means of communication and imposes the regulatory structure designed for public utilities. Federal regulation could also open the door to de facto censorship of ideas perceived as threatening to the political class – ideas like the troops should be brought home, the PATRIOT Act should be repealed, military spending and corporate welfare should be cut, and the Federal Reserve should be audited and ended.


If the FCC’s plan to "protect" net neutrality and rein in the power of greedy corporations is so fantastic, then why haven’t its 332 pages been released for public consumption?

An excellent question by a person who is "awake" to what is going on.


Despite this mammoth change in the function of the web, no Congressional debate took place, no bills were introduced and no legislation was signed. The vast majority of Americans are unaware that this is even taking place since the news networks are offering scant coverage.

The change is being made under a form of “administrative law” in accordance with the Obama administration’s guidance, which claims it has the backing of millions of Americans.

If that’s the case then why can’t we see this amazing plan for Internet utopia? Why has Federal Communications Commission chairman Tom Wheeler refused to testify before Congress on the issue?

Why has Wheeler failed to properly address concerns voiced by critics, including FCC Commissioner Ajit Pai, one of the few Americans to have seen the 332 page document, that the new rules will hand the feds the power to micromanage, license and censor the Internet and that the plan is a “solution” to a problem that doesn’t exist?

Why is Wheeler channeling Nancy Pelosi’s infamous, “we have to pass the bill so you can find out what is in it,” rhetoric in refusing to make the rules public?

Why are the vast majority of liberals and tech enthusiasts, who expended enormous amounts of energy fighting against efforts to chill Internet freedoms via SOPA and PIPA, actually endorsing the implementation of the FCC’s regulatory framework without question?

Do they think that an administration which has proven itself to be the most antagonistic in White House history when it comes to whistleblowing and the free flow of information has suddenly had a change of heart?

Upon passage of new "Open Internet" regulations, Commissioner Ajut Pai requested that the FCC "immediately release the 332-page Internet regulation plan publicly and allow the American people a reasonable period of not less than 30 days to carefully study it." Pai’s request was denied, according to NPR.

As Paul Joseph Watson reported yesterday, placing the internet under FCC jurisdiction and rules is part of the Obama administrations secret plan to grease the skids for censorship & licensing to operate a website. That is why this will be the end of the internet, as we know it today.


TheChristianObserver.blogspot.com
This blog is not affiliated with www.christianobserver.org.
Posted by steve at 9:11 PM