ENEMY OF THE STATE 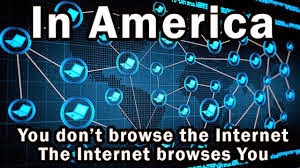 Dave Hodges, radio talk show host on the Rebublic Broadcast Network had this to say about Facebook:


Participation on Facebook could prove very dangerous to your future well-being. There is a reason that Facebook is aligned with both the CIA(Central Intelligence Agency) and the NSA(National Security Agency). I have several credible sources tell me that all data posted on Facebook goes into a series of cataloged files which culminates with each person being assigned a "Threat Matrix Score". The mere existence of a Threat Matrix Score should send chills up the collective spines of every American.

Your Facebook data is used to help compile an "enemies of the state" list. It is not too late for the average American to limit their exposure by NOT posting and participating on Facebook. Facebook participation should come with a black box warning:

"WARNING: The views expressed on Facebook can and will be used against you. Participation in Facebook could prove detrimental to the length of your life. All political dissident views are immediately reported to the CIA and the NSA. Risk of repeated exposure on Facebook could result in you and your family being hauled out of their homes at 3AM, separated from your family and sent to a re-education camp".

Before you dismiss this hypothetical black box warning as too much "tongue in cheek", please consider that the NSA is presently extracting large amounts of Facebook data and I do not think they are compiling a Christmas card list.

Whistle blower, Julian Assange, once stated that "Facebook in particular is the most appalling spying machine that has ever been invented. Here we have the world’s most comprehensive database about people, their relationships, their names, their addresses, their locations and the communications with each other, their relatives, all sitting within the United States, all accessible to US intelligence. Facebook, Google, Yahoo – all these major US organizations have built-in interfaces for US intelligence. It’s not a matter of serving a subpoena. They have an interface that they have developed for US intelligence to use."

Never before in American cyber-history do we see such an arrogant and agenda serving entity operating their propaganda so far in the open as we do with Facebook. This propaganda end of the New World Order is being blatantly exposed.

Facebook’s arrogance was on full display when highly respected journalist, Jon Rappoport was banned from sharing his articles on Facebook. In this instance of blatant censorship, Jon’s banned article was merely a review of certain aspects of American presidents ranging from Nixon to Obama. Like so many of us that understand history and can see the tyrannical path that Obama is taking us down, Rappoport identified Obama’s unconstitutional missteps. And for daring to tell the truth, Facebook banned Rappoport for the mere expression of a legitimate political opinion.

Readers may also recall when members of Infowars.com and the popular talk show host, Michael Rivero were banned in December of 2012, until the public outcry for Facebook to reinstate their respective accounts backed Facebook into a corner from which they acquiesced and reinstated the previously banned media figures.

It is for this reason that I do not have a Facebook or Twitter account. It is bad enough that the NSA can turn on my/your cell phone microphone and camera remotely(CNN Money, Fox News) listening to everything you say and recording every word spoken without giving them more data to profile all of your relationships with family members, relatives, business associates and your interests, hobbies and political views on Facebook.

Would you want the government to know everything about you? Are your views in compliance with the new "political correctness"?

As I wrote in my previous article The Totalitarian State:


The NSA surviels 75% to 80% of all electronic communications: phone calls, e-mails, text messages, instant messaging and internet use through various programs such as PRISM, FAIRVIEW, BLARNEY, XKEYSCORE, MARINA, PINWALE etc.. According to NSA whistleblower William Binney "The NSA lies about what it stores. The NSA will soon be able to collect 966 exabytes a year, the total of internet traffic annually."

The National Security Agency collects information for the United States government and gives it to whatever U.S. government agency requests it such as the Department of Justice(DOJ), the Department of Homeland Security(DHS), the Federal Bureau of Investigation(FBI), the Drug Enforcement Agency(DEA), and Immigration and Customs Enforcement(ICE) etc. for prosecution and/or apprehension of whistle blowers or whoever the U.S. government wants to target, including U.S. Senators and Congressman.

This is accomplished through blackmail, extortion or political pressure. This is why nothing ever changes whether a Democrat or Republican is elected as President. The same technecratic, collectivist, totalitarian agenda to de-throne the U.S. as a world power continues, only now the new Stasi has the ultimate tool in their hands. Complete, total information on virtually every American. Total information awareness. Facebook as a spy tool would make them proud.


Are you one of those who say so what? How would you feel if this happened to you? 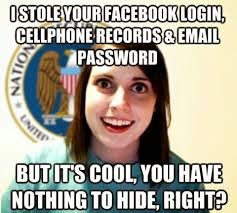 In practical effect this is what the NSA has done to you, only they don't tell you and you would never know unless Homeland Security interviews you.

We know your views on abortion, immigration, the Founding Fathers; the First, Second, Fourth and Sixth Amendments to the U.S. Constitution; illegal aliens, Muslims, homosexuals and the President. We have all your records. We know how you think and can predict what you will do in any given situation. We know your location; when you go out and where you will be. We know who you will be with. We know because we have all your cell phone conversations, we monitor all your tweets and know all of your "friends" on Facebook. We monitor all your e-mails and record every text messaage. We know all of your political views and those of your friends. These are not "politically correct".

Do not...... or we will make life very uncomfortable for you and those you know. Or, we could just disappear you legally through the NDAA or The Patriot Act. Of course with our executive orders we can do anything to you that we want.

Do you see the "chilling effect" this has on free speech? Do you see the incredible power it gives those who have your total information?


"The greater the power the more dangerous the abuse"...Edmund Burke


Hitler comes to mind with the Gestapo and the Stasi: the East German secret police.

Now it is only a matter of time before the full tyranny to come manifests itself as it did in Germany under Hitler and in East Germany under Communist domination with the Stasi. Jesus Christ in his grace has granted us the wisdom to see into the future as he has given us the Book of Revelation and Daniel to guide us. We also have past history to study how tyranny sets itself up.

We are seeing the American government completely corrupt at the highest levels abusing the military and intelligence gathering organizations(NSA) to spy on every American; to implement complete control of the American population.

Related to abusing the power of the military, the Department of Homeland recently fired a General who was just doing his duty. I'll let Dave Hodges explain:


One of my former military sources has introduced to me, in the very early hours, of December 21, 2013, a General who was fired on December 14, 2013. The fired General’s job, among other duties, was to coordinate the various national guard units into a cohesive fighting force and to uniformly respond to a national threat (i.e. a pandemic outbreak). The performance reviews of this general had been stellar. However, he had seen an increasing Department of Homeland Security usurping of his authority over the past couple of years. As he related to me, the major problem started when he was ORDERED BY DHS TO STAND DOWN AND TURN OVER CONTROL OF THE NATIONAL GUARD EMERGENCY RESPONSE OPERATIONS PLANNING TO DHS. When he refused to sign off on the transfer of operational protocols, without the President’s or a Joint Chief’s signature ordering him to do so, he was fired. If he had been given these orders from the chain of command he said he would have uniformly transferred National Guard authority to DHS. HE WAS FIRED BY DHS! SINCE WHEN DOES DHS RUN THE MILITARY? As he was fired he stated that he and his family were threatened if he went public.

The change from freedom to tyranny is slow at first but as the monitoring of the population becomes more ubiquitous, pervasive and technologically advanced tyranny becomes more manifest until total control is achieved and freedom becomes a distant memory. We must resist this at every turn before our freedom is completely gone.


"Those who don't know history are destined to repeat it"...Edmund Burke


TheChristianObserver.blogspot.com
This blog is not affiliated with www.christianobserver.org.
Posted by steve at 4:22 PM