THE PITCHFORKS WILL COME. THE TOP 1% ARE RUNNING SCARED.

Is a revolution coming? The last time interest rates were this low historically for a similar period of time was in France. What followed was the French Revolution.

Why a revolution? Because with fiat paper currencies the only way to pay off the national debt is to print more paper money which devalues its value causeing hyperinflation. This in turn makes basic items like food and clothing become unaffordable to the remaining 99% of the population. What will result is social chaos heretofore unknown in the United States.

At one time the French were a world superpower like the United States. Through costly wars, hyperinflation, and tax evasion the once mighty French empire collapsed into economic chaos. At the time of the French Revolution the French middle class was paying 80% of their income for food.

France never regained it's status as a world superpower after it's total economic collapse.


The most interesting lesson from the French Revolution, I believe, is how quickly a great power/superpower can fall from the heights of preeminence, how quickly bad state finances can erode into a political crisis, how rapidly the domestic order can erode and even dissolve, due to the economic costs of continuous wars, an ever-increasing national debt, an aristocracy(today represented by global corporations) that refuses to pay its fair share of taxes, and a tightly-squeezed middle class that carries the majority of the financial burdens of state upon its shoulders, while dealing with the consequences of a horrendous, state-induced inflation.

We also shouldn’t forget the sad cultural results of this fall. Before the Revolution, French was the international language of business, science, culture and politics. The Czar spoke French in the Kremlin. Benjamin Franklin and Thomas Jefferson wrote many scientific and philosophical essays in French (even if translated with the help of others). The greatest scientific journals of the age were published in French. Frederick the Great of Prussia, the greatest of all German monarchs and military heroes, surprisingly refused to speak German (which he regarded as too gutteral and barbaric for his refined, sensitive tastes) and only spoke French at his French-named palace in Potsdam, Sanssouci.

After the Revolution and the 20 years of world war that followed in its wake, French fell by the wayside and was seen as the language of a failed empire and people.

We are not immune. It happened to the French. It will happen to the United States unless the federal government changes it's current policies to benefit the middle class. The causes are the same. Study history, not Lebron James!

It is a distinct advantage to the U.S. government to keep interest rates low. It allows the government to borrow money from a private bank(the U.S. Federal Reserve Bank) at vitually no cost to fund countless wars and the social welfare state. It allows speculators to borrow very cheap money to fuel the meteoric rise of the U.S. equity markets (stock market) and the U.S.bond market.

But this speculation is not good because it does not produce goods and services to benefit the 99%: only paper profits and investment banking fees.

Low interest rates are only a benefit if you can take advantage of them. The main beneficiaries of low interest rates are those who have access to credit, own stocks and real estate (i.e. those in the wealthier income brackets). Those not owning stocks or real estate miss out on the appreciation of stocks and lacking good credit can not participate in the housing market.

Most retired people rely on a fixed income to fund their expenses. They saved for years to build their nest eggs for their retirement but are seeing their savings run out because of dramatically reduced fixed income interest payments.


If we don’t do something to fix the glaring inequities in this economy, the pitchforks are going to come for us. No society can sustain this kind of rising inequality. In fact, there is no example in human history where wealth accumulated like this and the pitchforks didn’t eventually come out. You show me a highly unequal society, and I will show you a police state. Or an uprising. There are no counterexamples. None. It’s not if, it’s when.

Many of us think we’re special because "this is America." We think we’re immune to the same forces that started the Arab Spring—or the French and Russian revolutions, for that matter. I know you fellow .01%ers tend to dismiss this kind of argument; I’ve had many of you tell me to my face I’m completely bonkers. And yes, I know there are many of you who are convinced that because you saw a poor kid with an iPhone that one time, inequality is a fiction.

But here's an odd thing. During the past three decades, compensation for CEOs grew 127 times faster than it did for workers. Since 1950, the CEO-to-worker pay ratio has increased 1,000 percent, and that is not a typo. CEOs used to earn 30 times the median wage; now they rake in 500 times. Yet no company I know of has eliminated its senior managers, or outsourced them to China or automated their jobs. Instead, we now have more CEOs and senior executives than ever before. So, too, for financial services workers and technology workers.

All manipulation schemes eventually become overwhelmed by natural market forces and the 1% know this. That is why they are renouncing U.S. citizenship and leaving the country in record numbers. The Fed’s QE program is entering its sixth year. Eventually the market will demand higher rates for the risk of extending credit to a sovereign nation that meets its obligations by printing the difference. When that happens the party that was enjoyed by the 1% will be over and the pitchforks will appear as they always have in the past.

Now throw in La Raza pictured below (note the Mexican Flag emblem on their shirts) and MS-13 flooding across our open southern border along with hundred's of thousands of poor, unskilled, disease laden immigrants, and the globalists will have their weapon of choice to fuel the take down of the United States through economic inequality and class warfare for the coming North American Union which Lou Dobbs discusses below. 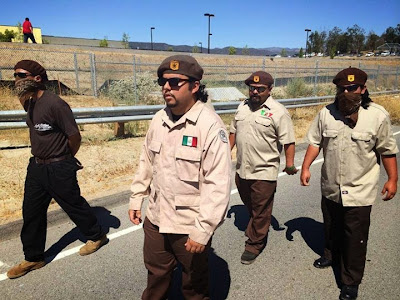 TheChristianObserver.blogspot.com
This blog is not affiliated with www.christianobserver.org.
.
Posted by steve at 8:59 AM