TheChristianObserver.blogspot.com
This blog is not affiliated with www.christianobserver.org.
Posted by steve at 7:16 PM No comments:

THE DOMESTIC WAR ON AMERICA FROM WITHIN 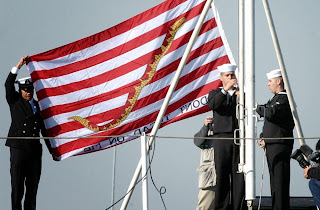 Navy SEALs ordered to remove 'don’t tread on me' Navy Jack from uniforms
by Carl Higbie Author, 'Battle on the Home Front'

The Navy Jack is the 'don’t tread on me' flag, one that has earned a revered place in America’s naval history and a beloved place in sailor’s hearts, through its use for over two centuries. This symbol of America’s naval ferocity has spanned our country’s entire existence, flying from the masts of the Continental Navy during the war of independence, to today’s War on Terror. In fact, an amendment to the Navy code called SECNAV Instruction 10520.6 clearly states that as of 31 May 2002 all ships are to fly the flag throughout the duration of the War on Terror.

So why would ranking SEAL commanders ban the historical symbol? Is the proverbial top bass banning the flag? Is President Obama?

Clearly the administration and sycophant "top brass" officers have degraded America's military prestige; from hand-tying rules of engagement, to uniform regulations that make our military allegedly more compatible with foreign forces, to the banning of an awe-inspiring flag that traces its roots to the first U.S. Navy. We have a civilian-led military, but why should our ranking commanders be complicit in the administration’s war on it? Why don’t they stand up to Obama and his leftist cronies?

During my two deployments to Iraq, "Don’t Tread on Me" was a phrase seen on nearly every uniform and platoon space — including mine. From patches to flags to large paintings on concrete barriers, our commanders themselves wore the insignia on their sleeves — until now.

Perhaps this is why so many of my former teammates felt compelled to send me the email below. They may not be able to expose the administration’s travesty, but I can. The email, dated October 22, reads:

WARCOM and GROUP TWO/ONE have pushed out the uniform policy for NWU III and any patches worn on the sleeve.

Again the only patch authorized for wear is the American flag on the right shoulder. Please pass the word to all

After reading the email, I first wondered, 'why?' (Actually, first I headed to the gym to take out my frustration and anger on some unsuspecting weights with the fury and intensity only a former Navy SEAL can exert.) Why would our leaders sell out our heritage? Why would they rob present and future sailors of our battle cry?

When a friend of mine asked his leadership the same question, he was told, "The Jack is too closely associated with radical groups." We must assume that this thought policeman embedded in the SEAL community is speaking of the Tea Party, whose flag (which also dates from the American Revolution) depicts a snake with the same defiant slogan as The Navy Jack.

This begs yet another question: Who defines "radical group"? The last time I checked, all military personnel are under oath to “support and defend the constitution against all enemies, foreign and domestic." The Tea Party stands for constitutional rights and founding principles of civil liberties and limited government. Radical? Not unless you’re a leftist hell-bent on destroying the foundations of our country. Or as the President has stated as the objective of his presidency, "to fundamentally transform" America.

My friends asked me what they should do about this order. I answer them by saying, "You took an oath to defend this country from enemies foreign and domestic. Will you put your career before country? Will you put your career before your sacred oath?" I cannot tell anyone how to respond. I can tell you though that an enemy — foreign or domestic — that tries to take the Navy Jack from my uniform could only do so by ripping the patriotic patch from the uniform of my cold, dead body.

We all have choices to make. The Obama administration and the yes-men top brass have decided to wage war on our Navy’s heritage. Will the SEALs choose to defend that heritage and defy them, with all the impertinence the flag’s slogan implies? Or will they be tread upon?


Epilogue
"And how we burned in the camps later, thinking: What would things have been like if every Security operative, when he went out at night to make an arrest, had been uncertain whether he would return alive and had to say good-bye to his family? Or if, during periods of mass arrests, as for example in Leningrad, when they arrested a quarter of the entire city, people had not simply sat there in their lairs, paling with terror at every bang of the downstairs door and at every step on the staircase, but had understood they had nothing left to lose and had boldly set up in the downstairs hall an ambush of half a dozen people with axes, hammers, pokers, or whatever else was at hand?... The Organs would very quickly have suffered a shortage of officers and transport and, notwithstanding all of Stalin's thirst, the cursed machine would have ground to a halt! If...if...We didn't love freedom enough. And even more – we had no awareness of the real situation.... We purely and simply deserved everything that happened afterward."

My fellow Americans. We are entering a very dark period in our history. We are being systematically raped of our rights by a globalist elite who are at war with the American people as this article by Carl Higbie illustrates.

First they want to destroy our military and Christian heritage.

Next, they want to bring America to it's knees economically by bankrupting our free enterprise capitalist system through a strategy of overloading the entitlement system - to add so many to the entitlement rolls, that the country's economic system collapses, unleashing chaos and violence in the streets, thus affecting radical Leftist political change in government. This is called the "Cloward-Piven Strategy." Named after Richard Andrew Cloward and Frances Fox Piven, this strategy was used as the the basis to end poverty in the United States. Of course we know that that will never happen.

I would say that doubling the number of people on Food Stamps, to 49% of the U.S. population on some form of government subsidy since Obama took office "fits the bill" perfectly.

And what better way to destroy the health care system then to implement ObamaCare (Patient Protection and Affordable Care Act).

And then of course there is our balloning national debt under Obama.

This is all by design, not happenstance.

Political correctness is used by elite globalists to produce a "chilling effect" on independant thought. To keep the population in bondage to their "world view".

Don't wear a shirt with an American flag printed on it unless it is the desecration pictured below. 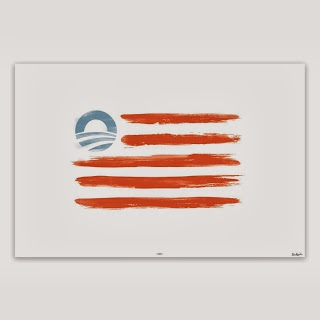 Don't wear a shirt with a picture of a gun. That would be racist. It might offend someone. This attitude makes we want to throw up!

Have some backbone. Stand for your rights; because until you resist they will just keep coming to take more of your rights away; until one day they are at your front door.


TheChristianObserver.blogspot.com
This blog is not affiliated with www.christianobserver.org.
Posted by steve at 8:34 PM No comments: