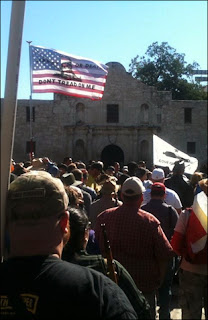 Were you watching college football?, Were you mowing the lawn? Or were you exercising (swimming and weight lifting despite my prior injuries) as I was?

While you were probably doing one of these activities others were defending our rights so that you could enjoy what you were doing in peace.

Some were "at tip of the spear" of defending your right to self defense that others in government want to take away. We need to all be on the front lines in this fight.

Let's ride with Alex Jones as he explains what the demonstration at the Alamo was all about today.


Join us as combat vets rallied for the second amendment at the Alamo on October 19.


Just recently, Veterans marched on Sunday, October 13th in Washington at the World War II Memorial in protest of the partial government shutdown that has kept them and other Americans from visiting war memorials across the country.

Veterans, including many in wheelchairs, took down police barricades and entered the memorial at about midday as others took the protest to the edge of the White House South Lawn.

Some of the metal barricades were carried the roughly half-mile walk from the memorial to the White House, where they were left near the fence in front of Pennsylvania Avenue.

Watching these Veterans over the past couple of weeks, truly inspires myself and thousands of other Americans. We should not worry about standing with one party or the other, but stand as if we were on the battlefield with these veterans. The brave men and women that serve our country now and past deserve the utmost respect.

It is truly a sad day when the U.S. President uses Veterans as politcal pawns to get revenge on the American people who oppose ObamaCare and his other naked power grabs.


Epilogue
If we do not fight for our right to bear arms in self-defense the U.S. government will take that right away permanently as it has in just about every other developed country in the world except Switzerland where almost every adult male is legally required to possess a gun. Virtually every home has a gun. One of the few nations with a higher per capita rate of gun ownership than the United States, Switzerland has virtually no gun crime.

This pokes holes in the Democrat's, Progressives, and Socialist minions arguements that we must ban guns to "protect" the citizens from crimes involving guns. Actually just the opposite is true. In countries where gun ownership is high among private citizens the crime rates involving guns are much lower do to the criminals knowing that a well armed citizen may be there to defend himself with a gun.

Swiss gun ownership is not even a trivial crime problem domestically. Despite all the guns, the murder rate is a small fraction of the American rate, and is less than the rate in Canada or England, which strictly control guns, or in Japan, which virtually prohibits them. The gun crime rate is so low that statistics are not even kept.

What have we learned from Switzerland? Guns in themselves are not a cause of gun crime; if they were, everyone in Switzerland would long ago have been shot in a domestic quarrel.

As Thomas Jefferson is reported to have said;


"When governments fear the people, there is liberty. When the people fear the government, there is tyranny. The strongest reason for the people to retain the right to keep and bear arms is, as a last resort, to protect themselves against tyranny in government."

The right to "bear arms" therefore is a litmus test. Once the government takes that right away, if it can, it has crossed the line in the sand that our forefathers gave us to defend ourselves from tyranical government. The government will then have nothing to fear from it's citizens and will institute whatever injustices are necessary to serve it's own goals of corporate, political corruption and control of the U.S. population as it integrates the United States into a world governmentconsisting of 10 regions being set-up by the international banking cartel through such groups as The Club of Rome, the Trilateral Commission, and the Council on Foreign Relations.

Homeland Security has purchased billions of rounds of ammunition to prepare for that war and to dry up the supply for private citizens. This purchase includes hollow-point rounds, forbidden by international law for use in war, along with a frightening amount specialized for snipers. Police departments are given grants by Homeland Security to purchase drones and armored personnel carriers(MRAP) complete with gun ports for domestic use in America. We are seeing across-the-board militarization of local police forces. We are seeing frequent drills being staged in cities across America involving "black" helicopters and simulated live fire exercises to test integration of the local police forces with the military. 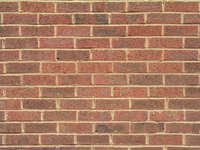 "The illusion of freedom [in America] will continue as long as it is profitable to continue the illusion. At the point when the illusion becomes to expensive to maintain, they will just take down the scenery, they will pull back the curtains, they will move the tables and chairs out of the way, and you will see the brick wall at the back of the theater.".....Frank Zappa

And I might add; there will be no escape!

If any man have an ear, let him hear. He that leadeth into captivity shall go into captivity: he that killeth witht he sword must be killed with the sword. Here is the patience and faith of the saints. Revelation 13:9-10 KJV

Gun control, gun confiscation, and capital controls are all driven by an evil desire for power to dominate and control the U.S. population. This is utimately a spiritual battle at it's heart between good and evil which will result in the following according to Revelation 13:7


"And it was given unto him to make war with the saints, and to overcome them: and power was given him over all kindreds, and tongues and nations." KJV

"He was given power to make war against the saints and to conquer them. And he was given authority over every tribe, people, language and nation." NIV

As the international banking cartel takes over, instituting ever more restrictive capital controls and further nationalizes the U.S. ecomony to bring the U.S. down to "third world" status to meld us into an international 10 union confederation their overall plan will become more apparent.

" And he causeth all, both small and great, rich and poor, free and bond, to receive a mark in their right hand, or in their foreheads: And that no man may buy or sell, save he that had the mark, or the name of the beast, or the number of his name. Here is wisdom. Let him that hath understanding count the number of the beast: for it is the number of a man; and his number is Six hundred three score and six." Revelation 13:16-18 KJV.

"He also forced everyone, small and great, rich and poor, free and slave, to receive a mark on his right hand or on his forehead, so that no one could buy or sell unless he had the mark, which is the name of the beast or the number of his name.
This calls for wisdom. If anyone has insight, let him calculate the number of the beast for, for it is man's number. His number is 666." Revelation 13:16-18 NIV.

The beast may refer to the beast system set up by Satan through his earthly allies. It is interesting that the present UPC coding labels are bounded by the bars coded 6 in the right boundry, center and left boundary when read with a bar code scanner. However this coding has not been placed yet on human beings skin or in the skin with the exception of the imbedded microchip.

When the international financial cartel implodes the debt bubble inside the U.S., and around the world, expect a solution to be proposed that will eliminate cash. Witness JP Morgan Chase bank's limiting all cash transactions (including deposits, withdrawals, and ATM usage) to $50,000/month, and baning all outgoing international bank wires. More restrictions will follow. They are just starting to gear up for the government debt implosion.

Have you read your bible lately?


TheChristianObserver.blogspot.com
This blog is not affiliated with www.christianobserver.org.
Posted by steve at 7:32 PM