PRISM: What you need to know.

According to Robert E.G. Beens, CEO StartPage.com and Ixquick.com the two most private search engines in the world:


The Washington Post and The Guardian have revealed a US government mass Internet surveillance program code-named "PRISM". They report that the NSA and the FBI have been tapping directly into the servers of nine US service providers, including Facebook, Microsoft, Google, Apple, Yahoo, YouTube, AOL and Skype, and began this surveillance program at least seven years ago. See PRISM slides explaining the program. 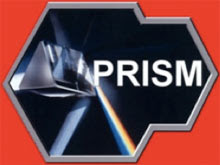 Note how the PRISM symbol is in the shape of a key, the hidden meaning of the symbol implying that this program is the key to unlocking a vast data mining operation of the U.S. govenment. Edward Snowden who leaked this information originally has stated that this is just the TIP of the iceberg of what the U.S. government is doing through its alphabet spy agencies to spy on innocent Americans.  Also note what a prism does.

A prism is a piece of glass or other transparent material cut with precise angles and plane faces. Prisms are useful for analyzing and refracting light (see refraction). A triangular prism can separate white light into its constituent colours by refracting each different wavelength of light by a different amount. The PRISM name and symbol no doubt was picked for a reason. The name PRISM then implies that the program is transparent, unkown by its target and yet powerful enough to sift through vast amounts of monitored electronic communications to separate out individuals much as a real prism separates out various wavelengths of white light. Ingenious?, No. Diabolical.

According to Barton Gellman and Laura Poitras, Washington Post reporters:


PRISM was launched from the ashes of President George W. Bush’s secret program of warrantless domestic surveillance in 2007, after news media disclosures, lawsuits and the Foreign Intelligence Surveillance(FISA) Court forced the president to look for new authority.

Congress obliged with the Protect America Act in 2007 and the FISA Amendments Act of 2008, which immunized private companies that cooperated voluntarily with U.S. intelligence collection.(The U.S. government knows that the carrot approach works better than the stick!) PRISM recruited its first partner, Microsoft, and began six years of rapidly growing data collection beneath the surface of a roiling national debate on surveillance and privacy. Late last year, when critics in Congress sought changes in the FISA Amendments Act, the only lawmakers who knew about PRISM were bound by oaths of office to hold their tongues.

According to Glen Greenwald and Ewen MacAskill of the London Guardian newspaper:

It also opens the possibility of communications made entirely within the US being collected without warrants.

Disclosure of the Prism program follows a leak to the Guardian on Wednesday of a top-secret court order compelling telecoms provider Verizon to turn over the telephone records of millions of US customers.

The National Security Agency has obtained direct access to the systems of Google, Facebook, Apple and other US internet giants, according to a top secret document obtained by the Guardian.

The NSA access is part of a previously undisclosed program called Prism, which allows officials to collect material including search history, the content of emails, file transfers and live chats, the document says.

The Guardian has verified the authenticity of the document, a 41-slide PowerPoint presentation – classified as top secret with no distribution to foreign allies – which was apparently used to train intelligence operatives on the capabilities of the program. The document claims "collection directly from the servers" of major US service providers.

Although the presentation claims the program is run with the assistance of the companies, all those who responded to a Guardian request for comment on Thursday denied knowledge of any such program.

In a statement, Google said: "Google cares deeply about the security of our users' data. We disclose user data to government in accordance with the law, and we review all such requests carefully. From time to time, people allege that we have created a government 'back door' into our systems, but Google does not have a back door for the government to access private user data."

Several senior tech executives insisted that they had no knowledge of Prism or of any similar scheme. They said they would never have been involved in such a program. "If they are doing this, they are doing it without our knowledge," one said.

An Apple spokesman said it had "never heard" of Prism.

The NSA access was enabled by changes to US surveillance law introduced under President Bush and renewed under Obama in December 2012.

The participation of the internet companies in Prism will add to the debate, ignited by the Verizon revelation, about the scale of surveillance by the intelligence services. Unlike the collection of those call records, this surveillance can include the content of communications and not just the metadata.

Some of the world's largest internet brands are claimed to be part of the information-sharing program since its introduction in 2007. Microsoft – which is currently running an advertising campaign with the slogan "Your privacy is our priority" – was the first, with collection beginning in December 2007.

It was followed by Yahoo in 2008; Google, Facebook and PalTalk in 2009; YouTube in 2010; Skype and AOL in 2011; and finally Apple, which joined the program in 2012. The program is continuing to expand, with other providers due to come online.

The extent and nature of the data collected from each company varies.

Companies are legally obliged to comply with requests for users' communications under US law, but the Prism program allows the intelligence services direct access to the companies' servers. The NSA document notes the operations have "assistance of communications providers in the US".

The revelation also supports concerns raised by several US senators during the renewal of the Fisa Amendments Act in December 2012, who warned about the scale of surveillance the law might enable, and shortcomings in the safeguards it introduces.

When the FAA was first enacted, defenders of the statute argued that a significant check on abuse would be the NSA's inability to obtain electronic communications without the consent of the telecom and internet companies that control the data. But the Prism program renders that consent unnecessary, as it allows the agency to directly and unilaterally seize the communications off the companies' servers.

A chart prepared by the NSA, contained within the top-secret document obtained by the Guardian, underscores the breadth of the data it is able to obtain: email, video and voice chat, videos, photos, voice-over-IP (Skype, for example) chats, file transfers, social networking details, and more.

With this program, the NSA is able to reach directly into the servers of the participating companies and obtain both stored communications as well as perform real-time collection on targeted users.

When the NSA reviews a communication it believes merits further investigation, it issues what it calls a "report". According to the NSA, "over 2,000 Prism-based reports" are now issued every month. There were 24,005 in 2012, a 27% increase on the previous year.

In total, more than 77,000 intelligence reports have cited the PRISM program.

Jameel Jaffer, director of the ACLU's Center for Democracy, that it was astonishing the NSA would even ask technology companies to grant direct access to user data.

"It's shocking enough just that the NSA is asking companies to do this," he said. "The NSA is part of the military. The military has been granted unprecedented access to civilian communications.

"This is unprecedented militarisation of domestic communications infrastructure. That's profoundly troubling to anyone who is concerned about that separation."


The well known Jim Marrs has this to say regarding the Edward Snowden NSA PRISM revelations.
Posted by steve at 9:31 PM No comments: