THE FACE OF THE NEW WORLD ORDER 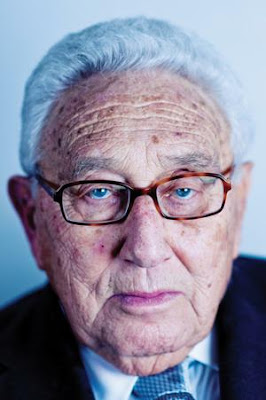 In a recent statement Henry Kissinger admitted that social upheaval and mass civil unrest are to be used as a means of merging the US into an "international system".


"The United States has to be part of an international system that we create domestically", he told The Harvard Crimson in the beginning of this month. When asked what the most important problems are facing American society today, Kissinger answered:

"Internationally, the problem is that there are upheavals going on in every part of the world, but these upheavals don’t follow the same basic causes, and so the United States has to be part of an international system that we create domestically."

What the old man is saying here ties neatly into statements he made in the past concerning the concept of seizing crises and upheavals, the causes of which may differ from nation to nation, in order to bring about an international order- thereby following the elite’s golden rule that order is best brought about by chaos. Furthermore, he provides us with a glimpse of the underlying intent he and his fellow-bilderbergers have in mind, stating in so many words that civil unrest- be it economically, politically or socially motivated- must be seized upon in order to merge nations into the desired "international system."

In a December 2008 Prisonplanet.com article it was reported that Kissinger, in an interview with the darling of Bilderberg Charlie Rose, "cited the chaos being wrought across the globe by the financial crisis and the spread of terrorism as an opportunity to bolster a new global order.", Steve Watson wrote.

"I think that when the new administration assesses the position in which it finds itself it will see a huge crisis and terrible problems, but I can see that it could see a glimmer in which it could construct an international system out of it.", Kissinger told Rose.


All this talk of crises and upheavals as just another country-specific means to a centralized global end could specifically point to a plan. While at the surface the elite might scurry to salvage the ailing euro as currency-cohesion crumbles, it may have developed a darker plan B that in case the euro may turn out to be beyond repair, the solution of a world currency will be provided. Seize the euro-crisis, in other words, to introduce a world currency. This follows the course of classic Hegelian dialectic, namely the problem (whether real or feigned) provokes the reaction which in turn allows the elite to provide the solution on a silver plate. It just now occurred to me that Kissinger’s words are ominously reminiscent of those written down by University of Chicago’s Alexander Wendt, who in 2003 in his treatise titled "Why a World State is Inevitable: teleology and the logic of anarchy" stated:


“Nationalist struggles for recognition are by no means over, and more new states- “more anarchy"- may yet be created. But while further fragmentation is in one sense a step back, it is also a precondition for moving forward, since it is only when difference is recognized that a larger identity can be stable. (…) Far from suppressing nationalism, a world state will only be possible if it embraces it.”

These words shed some sharp light on the words uttered by Kissinger and his fellow supranationalists, in essence revealing they are very much aware of the fact that the mere proposition of a world state will not make it so- may even backfire on them- and that now a detour should be pursued via nationalism and domestic unrest to get the job done- in other words not so much crushing protests for the sake of crushing them, but rather to use these upheavals for their own transnational designs.

At the same time, the elite members who gather at important meetings are fencing themselves in out of fear of chaos erupting outside. Just a few days ago, the European Central Bank issued a press-release stating that in order to protect their staff and visitors from protesters it has:


"implemented measures (…), taking into account the protection granted to the ECB’s premises and operations by the Headquarters Agreement between the ECB and the Federal Republic of Germany."

This makes clear the banking elites of the world are worried their safety may well be impaired as a result of the protests planned against their meetings. The same caution will of course apply to the upcoming Bilderberg conference in Chantilly Virginia. We can expect local police and armed guards to protect the elite players inside, who in return scheme all of mankind into another crisis.

This is and always will be a spiritual battle between good and evil. Between Adonay (Jesus Christ) and Lucifer. That is the great secret of history that many never see. Lies and deception mask it from our view. But in the end it is reality, not illusion that will determine our fate.

And this is reality: "These have one mind;"[shall act in concert as one] "and shall give their power and authority unto the beast."[Satan, Lucifer, The Beast System].....Revelation 17:13 Holy Bible, Gideons International.

"For God hath put in their hearts to fulfill his will, and to agree, and give their kingdom unto the beast, until the words of God shall be fulfilled."..... Revelation 17:17

"Today I may tell you that our goal is now only a few steps off. There remains a small space to cross and the whole long path we have trodden"(20 centuries per protocol #5), "is ready now to close its cycle of the Symbolic Snake" (i.e. the snake, serpent represents the enlightener of the spiritual by giving mankind the knowledge of good and evil, Satan) "by which we symbolize our people."Protocol #3, Protocols of the Wise Men of Zion (Scion), Cooper, Behold a Pale Horse, 275.

"Then I stood on the sand of the sea"[the sea representing the various populations of the world] and I saw a beast rising up out of the sea, having seven heads and ten horns, and on his horns ten crowns, and on his heads a blasphemous name." ...Revelation 13:1

TheChristianObserver.blogspot.com
This blog is not affiliated withwww.christianobserver.org.
Posted by steve at 11:03 AM