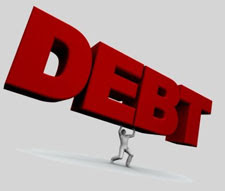 We did not ask the politicians to borrow the money that has put the U.S. into debt; we expect them to live within "their means" like everyone else. By putting the U.S. taxpayer into debt slavery, we help finance the governments poppy fields in Afghanistan and their gun-running operations in Mexico.

If congress would merely spend less we would not be in this mess. Because congressman want to be reelected they pander to the masses hooked on government programs. They borrow more from the PRIVATE Federal Reserve Bank (which has no reserves and is not government owned) to continue the government handouts and "kick the can" of responsible fiscal policy down the road; until one day all will come crashing down when the dirty rotten scoundrels in fine pin stripe suits will be run down and lynched by the mob they pander to. I wonder how many of them are FreeMason's? (the devil in sheep's clothing) 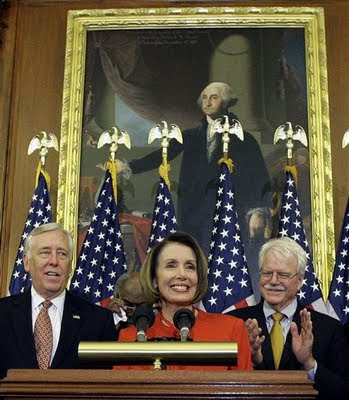 The politicians are the front men who will take the fall, while Bernanke, Geitner, Paulson, Goldman Sachs et. all will grow rich and stronger as the U.S. crumbles from within. 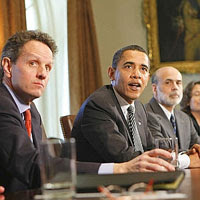 By borrowing more money from the Federal Reserve Bank to pay for the increasing costs of the social safety net our long term debt continues to grow. This increases the total debt and therefore the interest payments by the U.S. government to the PRIVATE Federal Reserve Bank.

Thus, we see the true nature of debt: a financial form of slavery. Debt is designed in such a way that, like a fly caught in a spider’s web, the more it struggles, the more entangled it gets; the more it struggles to break free, the more it arouses the attention of the spider, which quickly moves in to strike its prey – paralyzed – with its venom, so that it may wrap the fly in its silk and eat it alive. Debt is the silk, the people are the fly, and the spider is the large financial institutions – from the banks to the IMF. The nature of debt is that one is never meant to be able to escape it. Hence, the "solution" to keep the U.S. from defaulting is to acquire more debt by borrowing from the Federal Reserve (a PRIVATE bank.) Of course, this new debt is used to pay the interest on the old debt (note: it is not used to pay OFF the old debt, just the interest on it). However, the effect this has is that it increases the over-all debt of the nation, which leads to higher interest payments and thus a greater cost of borrowing. This, ultimately, leads to a need to continue borrowing in order to pay off the higher interest payments, and thus, the cycle continues.

The U.S government and American people are in bondage to a PRIVATE bank which finances activities that will bring America to it's knees. Fractional Reserve banking established by Lord Rothschild in Europe in the late 1700's is the "beast system" which rules the world.

For all the "bail outs" aimed at saving the banking system, this prescription inevitably results in greater debt levels than those which induced the debt crisis in the first place. It is the U.S. Treasury's responsibility to print money; not borrow it from a private bank. The central banks of the world have used the American taxpayer through taxpayer funded bailout's to cover a small portion of their losses from trading dirivatives. The losses from derivatives are estimated at 600 trillion to 1.5 quadrillion dollars or about 20 times the size of the entire global economy.

The process of borrowing and "consolidating" debt has devastating social and political consequences.

You will start hearing more about the imposition of "fiscal austerity measures" from our politicians to "reign in" the debt. But in reality they only pay it "lip service" and will do nothing to cut federal spending in REAL TERMS.

The U.S. government must cut spending and increase taxes in order to "service" its debt by reducing its annual deficit.

In fact, "fiscal austerity" is a state-implemented program of social destruction, or "social genocide". Such austerity measures include cutting social spending, which means no more health care, education, social services, welfare, pensions, etc. This directly implies a massive wave of layoffs from the public sector, as those who worked in health care, education, social services, etc., have their jobs eliminated. This, naturally, creates a massive growth in poverty rates, with the jobless and homeless rates climbing dramatically. Simultaneously, of course, taxes are raised drastically, so that in a social situation in which the middle and lower classes are increasingly impoverished, they are then over-taxed. This creates a further drain of wealth, and consumption levels go down, further driving production levels downward, and (local) private businesses cannot compete with foreign multinational conglomerates, and so businesses close and more lay-offs take place. After all, without a market for consumption, there is no demand for production.

Naturally, in such situations, the masses of people – those who are doomed to suffer most – are left greatly impoverished and the middle classes essentially vanish, and are absorbed into the lower class.

Social genocide is a slow, drawn-out and incremental process.

The reflexive action of states, therefore, is to move in to repress – most often quite violently – protests and demonstrations. The aim here is to break the will of the people. Thus, the more violent and brutal the repression, the more likely it is that the people may succumb to the state and consent – even if passively – to their social conditions. However, as the state becomes more repressive, this often breeds a more reactive and radical resistance. When the state oppresses 500 people one day, 5,000 may show up the next. This requires, from the view of the state, an exponentially increased rate of oppression. The risk in this strategy is that the state may overstep itself and the people may become massively mobilized and intensely radicalized and overthrow – or at least overcome – the power of the state.

We are getting closer to what has been termed the "tipping point" where continued cutbacks in government social programs will result in more social unrest; closer to the day when rioting will erupt and the Feds will react violently to quell any protests. The brutal repression by police in Pittsburgh and Seattle are merely a taste of what is to come. Acording to David Icke the U.S. will reach that point between 2016 and 2020.

Using terrorism as an excuse, the U.S.government through a program known as End Game has made contingency plans to detain without recourse millions of its own citizens.

TheChristianObserver.blogspot.com
This blog is not affiliated with www.christianobserver.org
Posted by steve at 8:12 PM