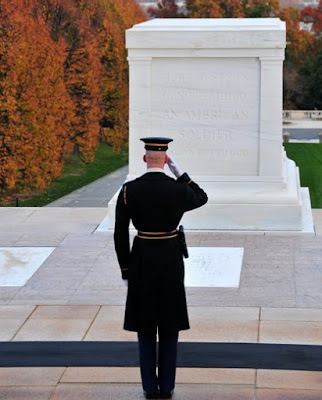 Does Hilary Clinton, Secretary of State honor our veterans? You be the judge. On Wednesday, February 16 she gave a speech at George Washington University condemning governments that arrest protesters and do not allow free expression of speech. In the video posted below of that speech she deplores the Egyptian government cutting off Internet and cell phone service to it's citizens. Yet she will not tolerate a lone veteran who says nothing while standing with his back to her during the speech.

As Secretary of State Hillary Clinton gave her speech at George Washington University yesterday condemning governments that arrest protesters and do not allow free expression, 71-year-old Ray McGovern was grabbed from the audience in plain view of her by police and an unidentified official in plain clothes, brutalized and left bleeding in jail. She never paused speaking. When Secretary Clinton began her speech, Mr. McGovern remained standing silently in the audience and turned his back. Mr. McGovern, a veteran Army officer who also worked as a C.I.A. analyst for 27 years, was wearing a Veterans for Peace t-shirt.

Blind-sided by security officers who pounced upon him, Mr. McGovern remarked, as he was hauled out the door, "So this is America?" Mr. McGovern is covered with bruises, lacerations and contusions inflicted in the assault.

Mr. McGovern is being represented by the Partnership for Civil Justice Fund (PCJF). "It is the ultimate definition of lip service that Secretary of State Clinton would be trumpeting the U.S. government's supposed concerns for free speech rights and this man would be simultaneously brutalized and arrested for engaging in a peaceful act of dissent at her speech," stated attorney Mara Verheyden-Hilliard of the PCJF. 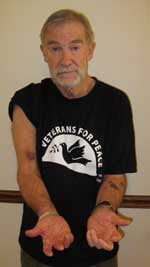 Mr. McGovern now works for Tell the Word, a publishing arm of the ecumenical Church of the Saviour in the Adams Morgan neighborhood of Washington, D.C.

We asked Ray for a quick statement after his release. He wrote:

"I find myself wondering if this show of brutality may be a signpost on a path to even wider and more brutal repression. I have been comparing what happened during Clinton’s speech Tuesday with my four-minute mini-debate with Donald Rumsfeld on May 4, 2006 in Atlanta. Halfway through, Rumsfeld gives the nod to a black-hatted security fellow to elbow me away from the microphone.

I shout, 'So this is America.' Rumsfeld takes one look at the TV cameras streaming live, makes a snap decision, and tells the security fellow to let me stay. During that same speech in Atlanta, one fearless witness stands dead-center in the audience with his back to Rumsfeld for the entire speech and is not bothered, much less beaten and jailed.

The contrast between the experience of May 2006 and February 2011 can be viewed through the prism of the proverbial 'boiling frog.' There does seem to be a subtle but successful campaign to get people gradually accustomed to increasingly repressive measures; and many, perhaps most, Americans seem oblivious."

After 9/11 Norman Mailer saw a 'pre-fascist climate' reigning in America. If we don’t stand up for our rights, it may not be long before we shall have to drop the 'pre.'"

Veterans For Peace is proud of our member Ray McGovern, whose simple, dignified action speaks volumes about the power of non-violence. We abhor the actions of the security personnel who reacted violently and in flagrant violation of Mr. McGovern’s First Amendment rights. We also deplore the indifference of Secretary Clinton who didn’t bat an eye and we demand that she apologize for her silence and hypocrisy. Most importantly, we call on the American public to wake up to the dark reality of what this country has become…a place where civil liberties and freedom of expression are becoming increasingly endangered, and the government’s response to every situation is intimidation and force.