The Bilderberg group and their secret and not so secret meetings have all had one main objective - how to reduce the number of people on the planet. These New World Order elitists are dictating who has the right to live and who doesn't.

The United States was once an industrial fountainhead, spewing forth streams of consumer goods such as automobiles, televisions, and refrigerators in international trade. Now, America is merely a nation of zombies working in the service industry.

Not feeling well? Are you a Constitutionalist? Maybe you have a mental illness.

Just take a pill, even if you think you don't need one. Big Pharma will appreciate it.
Epilogue
In August 2003, The National Institute of Mental Health (NIMH) and the National Science Foundation (NSF) announced the results of a $1.2 million taxpayer-funded study. The conclusion was that people who believe in traditional values - such as monogamous marriage, balanced budgets, strict interpretation of the Constitution - are mentally disturbed. In their paper titled "Political Conservatism as Motivated Social Cognition," the authors concluded that political conservatism stems from the need to satisfy various psychological needs....... 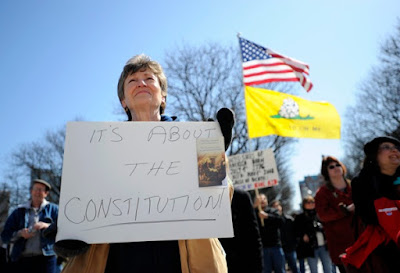 The researchers in the study used the phrase "motivated social cognition" as the new psychobabble term to describe the mental illness of "right wing conservatives."

So now, conservatives are not only being identified in FEMA materials as potential terrorists, but the NIMH and NSF have an official taxpayer-funded study to justify labelling conservatives as "mentally disturbed."

And what should be done with political conservatives suffering from "motivated social cognition"? Dr. Jose M.R. Delgado, a former professor of neuropsychiatry at Yale University Medical School and a man who has been connected to the CIA's MK-Ultra mind-control experiments, has recommended, "We need a program of psychosurgery for political control of our society. The purpose is physical control of the mind. Everyone who deviates from the given norm can be surgically mutilated. The individual may think that the most important reality is his own existence, but this is only his personal point view....Man does not have the right to develop his own mind... [REALLY?? Wars have been fought over lesser ideas...ed.] We must electronically control the brain. Someday armies and generals will be controlled by electronic stimulation of the brain." Dr. Delgado will enjoy living in the Orwellian digitally controlled New World Order.(1)

"Still, if you will not fight for the right when you can easily win without bloodshed, if you will not fight when your victory will be sure and not so costly, you may come to the moment when you will have to fight with all the odds against you and only a precarious chance for survival. There may be a worse case. You may have to fight when there is no chance of victory, because it is better to perish than to live as slaves." - Sir Winston Churchill(1874-1965), Prime Minister of Britain, The Gathering Storm, 1948.