Cash For Climate: Clunkers Have Nothing on This(1)

This past summer the United States introduced its "cash for clunkers" program in an attempt to rejuvenate the failing auto sector. Originally slated to cost US taxpayers $1 billion, the program soon ballooned to $3 billion in payouts and administrative costs. The idea was simple; bring in your older vehicle and receive a cash injection towards the purchase of a new automobile.

But its not all roses in this socialist auto-utopia. Following the end of the program, car sales in the US crashed by 27% in September(reported by AFP), and buyer's remorse is now setting in as new car owners are faced with making payments during an economic downturn. Remember, the "clunkers" may have been older vehicles, but they were paid for. But it's not only car buyers who will have to make payments. Just like other government handouts, the actual cost will be carried forward and remain on the books for years to come - another burden to the nations taxpayer.

...assuming the Cash for Clunkers program was financed by 30-year Treasury bonds, the related interest will cost U.S. taxpayers a total of about US $150 million annually. And those payments will continue until the principle has been paid back, which may never happen - ever.

However, all of this is chump-change compared to the "Cash for Climate" program, as governments around the world pour astronomical amounts of money into combating climate change - "hot air". Consider just one country: the United States of America.

Spending Money, Creating Money
In a document released this summer, the Science & Public Policy Institute reported that: "That US government has spent over $79 billion since 1989 on policies relating to climate change..."

in total, over the last 20 years, by the end of fiscal year 2009, the US government will have poured in $32 billion for climate research - and another $36 billion for development of climate-related technologies. These are actual dollars, obtained from government reports, and not adjusted for inflation. It does not include funding from other governments on the global industry(2).

Joanne Nova, the author of the SPPI report, notes a very disturbing reality.

The most telling point is that after spending $30 billion on pure science research no one is able to point to a single piece of empirical evidence that man-made carbon dioxide has a significant effect on the global climate.(3)

But there's another side to this cash-for-climate story. In the fall of 2007, I had the chance to attend a Manitoba government-sponsored workshop on climate change and agriculture. It was an interesting one-day event: faulty science and lots of talk about farming practices made up the agenda.

What really roused our attention, however, was the potential to make a dollar in the growing carbon market - a trading system whereby "polluters" can purchase carbon offsets from a clean seller in an open carbon exchange. A simplistic illustration helps...

Let's say a factory in England produces 100,000 tons of CO2 a year, and the company has been told it must lower its carbon dioxide emissions to a certain level or "cap," as required by international climate laws. "Clean up or shut down!" demands the environmental bureaucrat, "You're pumping too much carbon into the air" (Never mind that plants need carbon dioxide, CO2, to live - a slightly inconvenient truth).

Meanwhile, projects that offset carbon dioxide are calculated as to how much CO2 they collect, or how much the project will "offset" such as in the case of a wind farm verses a coal-fired utility company. Carbon-friendly projects could include zero-till agricultural practices, reforestation, or alternative energy utilities. Then after these projects are calculated in terms of CO2 savings, these "carbon credits" are driven through a brokerage and trade exchange. The factory in England can now enter the market and purchase the necessary carbon credits to offset the 100,000 tons it emits. What did the factory get? The ability to satisfy the climate regulators - now a "carbon friendly" company. Did the factory do anything to physically slow down or stop emitting CO2? Probably not: It just paid for the right to continue emitting. The farmer or forester made a small dollar, and in the process may have tied their hands with new property-use restrictions. The brokers and investment firms, however, made big money in fees and by bundling contracts and playing the market.

Again, the above illustration is simplistic as this carbon-trading regime had many more twists and turns. But money changed hands, the law was satisfied, and the bubble economy in hot air expanded. Imagine that: You can save the planet and make a buck doing it!

It's an amazing concept: a government dictated marketplace in CO2 contracts. There's more! Beyond creating a trading system in case-by-case CO2 contracts, there is a distinct possibility that a new carbon based monetary unit - an international climate reserve currency - will emerge along with the carbon economy.

Don't discount this idea. At present, the US dollar is the keystone unit for global energy trades, particularly in petroleum: a position it has held for decades. But many in the Asian and European financial community are looking to replace the US dollar as the global reserve currency with different medium of exchange.(4) Could carbon credits become this new global currency; politically unattached to any singular nation?

In 2004, the Harvard International Review published an article titled "A New Currency: Climate Change and Carbon Credits." It stated:

A new currency is emerging in world markets. Unlike the dollar, euro, or yen that trade for tangible goods and services, this new money exchanges for pollution - particularly emissions of carbon dioxide... Carbon credits, as they are called, are poised to transform the world energy system and thus the world economy.(5)

Two years later a report by the UK's Centre for Sustainable Energy suggested that individual citizens be granted a CO2-credit account "based on a carbon credit debited whenever carbon is consumed."(6) Hint: Every conceivable economic action requires energy and is therefore susceptible to a "carbon debit." Who do you think the real money-makers will be in this kind of scheme?
Finally, Sindicatum Carbon Capital, a large UK-based investment group, is calling carbon credits for what they are: A "new global green currency."

Hot Air, Big Money
A glance at the present and future dollar value of "hot air" demonstrates just how significant this market is. In the SPPI document, Climate Money, Joanne Nova informs us:

Even though the government has poured in around $70 billion dollars of influence over the last 20 years, that pales in comparison with the rapidly growing force of carbon trading. According to the World Bank, turnover of carbon trading doubled from $63 billion in 2007 to $126 billion in 2008... Not surprisingly banks are doing what banks should do: they're following the promise of profits, and hence urging governments to adopt carbon trading...The potential involved in an entirely new fiat currency has banks and financial institutions "wholly in bed" with scientific theory...(7)

But there's much more at stake. Climate Money quotes Bart Chilton, who heads an advisory committee for the Commodity Futures Trading Corporation, predicting that the carbon marketplace could be trading $2 trillion dollars worth of credits in the near future. "It wouldn't be as large as some of the financial markets - Treasury bills - but it would be larger than any physical commodity market."(8) Others predict higher global values. Richard Sandor, chairman of Climate Change Plc, holds that this market will eventually "total $10 trillion a year."(9)

No wonder Al Gore, who's the founder of Generation Investment Management - a funding group that invests in the carbon market - is the most vocal "global warming" alarmist on the planet. Gore isn't an environmental scientist nor is he a climatologist; he's a salesman - a political lobbyist with a major economic stake in the upcoming trillion-dollar carbon market." He's a rich man who's set to become much richer, buying and selling "hot air."

Between cap-and-trade carbon markets and the fast approaching carbon tax that's set to impact your wallet, in whatever country you live, you can rest assured that all of this will be sold to us in the name of saving the environment while rebuilding the global economy. As this new international climate change regime isn't far off. Indeed, now that the December 2009 Copenhagen climate change conference is over, complete with all its fiascoes, world leaders are moving forward to produce a global tax-and-trade agreement.

Ironically, as the world is presently dealing with the problems associated with the aftermath of economic bubbles, we're being set up for what could be the biggest bubble yet. After all, the best way to inflate a balloon is with hot air. 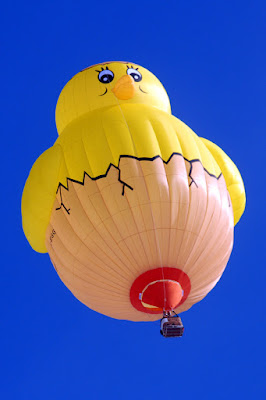