The founder of The Weather Channel, John Coleman, stated last year, November 2008 that global warming is "the greatest scam in history".

While speaking at the 2008 International Conference on Climate Change that was held in New York City, "Coleman took his criticisms further by advocating that all those involved in the sale and marketing of carbon credits, including Al Gore, should be sued 'to finally put some light on the fraud of global warming."

Carbon credits are part of the "cap and trade" system.

To resolve the "climate crisis," Gore wants to put a cap on the production of greenhouse gases. He calls for an immediate freeze on U.S. emissions, a ban on new coal-fired power plants, tough new fuel-economy and energy-efficiency standards, renewable energy mandates, carbon taxes and mandatory targets and timetables for reducing greenhouse-gas emissions. Those emissions consist mostly of carbon dioxide (CO2), the byproduct of fossil fuels such as oil, coal and natural gas, which supply 85% of all U.S. energy.

Under a so-called "cap-and-trade" system, government places a ceiling or "cap" on private-sector emissions of CO2 and other "greenhouse gases." Each sector, industry or business is allocated a fixed quantity of carbon credits that allow it to emit specific quantities of greenhouse gases. As an example, one tradable carbon credit might permit the emission of one ton of CO2. If a business emits more tons of CO2 than its supply of credits allows, it has the option to buy surplus credits from other firms -- or it will have to pay a fine in proportion to the amount of the excess emission. By contrast, businesses that emit less than their allocation can sell their excess credits.

This system, which may sound market-friendly, is something only a bureaucrat could dream up. The twist is that the carbon market exists only because the government’s imposition of a cap creates an artificial scarcity in the right to produce energy. In a cap-and-trade system, buyers will purchase their offsets from a broker or through an electronic trading platform. In Europe, carbon trading is already a reality. Since 2005, carbon offsets have been traded electronically on the European Climate Exchange (ECX). In America the major carbon-credit trading firm that currently exists is the Chicago Climate Exchange (CCX). CCX aspires to be the New York Stock Exchange of carbon-emissions trading.

Let's take a look at Al Gore's business connections to reveal why he pushes the global warming agenda.

Al Gore is chairman and founder of a private equity firm called Generation Investment Management (GIM). According to Gore, the London-based firm invests money from institutions and wealthy investors in companies that are going green. "Generation Investment Management, purchases -- but isn’t a provider of -- carbon dioxide offsets," said spokesman Richard Campbell in a March 7 report by CNSNews.

GIM appears to have considerable influence over the major carbon-credit trading firms that currently exist: the Chicago Climate Exchange (CCX) in the U.S. and the Carbon Neutral Company (CNC) in Great Britain. CCX is the only firm in the U.S. that claims to trade carbon credits.

How does GIM influence CCX, the exchange that provides a market for "carbon credits"?

Along with Gore, the co-founder of GIM is Treasury Secretary and former Goldman Sachs CEO Hank Paulson. Last September, Goldman Sachs bought 10% of CCX shares for $23 million. CCX owns half the ECX.

Clearly, GIM is poised to cash in on carbon trading. The membership of CCX is currently voluntary. But if the day ever comes when federal government regulations require greenhouse-gas emitters -- and that’s almost everyone -- to participate in cap-and-trade, then those who have created a market for the exchange of carbon credits are in a position to control the outcomes. And that moves Al Gore front and center. As a politician, Gore is all for transparency. But as GIM chairman, Gore has not been forthcoming, according to Forbes magazine. Little is known about his firm’s finances, where it gets funding and what projects it supports.

In 2006 Al Gore established his own global-warming non-profit group, the Alliance for Climate Protection, a 501(3)(c) charitable organization. Gore is chairman of the board. The group favors more stringent environmental policy regulations on the private sector and especially wants cap-and-trade legislation so that companies will be forced to lower their greenhouse gas emissions and buy carbon credits. Gore has reportedly given the alliance $250,000 and has said he will donate his share of the profits from An Inconvenient Truth to the group.

KPCB is actively working with entrepreneurs to solve our climate crisis. To accelerate our solutions, Al Gore has joined KPCB as a Partner, and KPCB has formed an alliance with Gore's Generation Investment Management (GIM). The combined network, expertise, vision and global reach of Gore, Generation and KPCB will help our entrepreneurs change the world.

Available data indicates that Mr. Gore has a net worth well in excess of $100 million. Gore has become a millionaire many times over, bringing him, in financial terms, shoulder to shoulder with the C-suite denizens he used to hit up for campaign cash. In addition to the steady flow of six-figure speaking gigs, he has become an insider at two of the hottest companies on the planet: at Google, where he signed on as an adviser in 2001, pre-IPO (and received stock options now reportedly worth north of $30 million), and at Apple, where he joined the board in 2003 (and got stock options now valued at about $6 million). He enjoyed a big payday as vice chairman of an investment firm in L.A., and, more recently, started a cable-television company(Current TV).

The Tennessee Center for Policy Research, a state think tank, revealed that he was an energy hog. Public records show that Gore’s Nashville mansion used in one month more than twice the electricity the typical American household uses in a year: His average monthly electric bill was more than $1,359. Moreover, Gore’s household energy use increased after An Inconvenient Truth, his film about global warming, was released to ecstatic reviews.

It seems that Mr. Gore is not willing to reduce his own green house gas emissions. Why should we?
Steve
thechristianobserver.blogspot.com
This blog is not affiliated with www.christianobserver.org.
Posted by steve at 9:06 PM

To view a five minute video presentation by Peter Worden of Worden Brothers Inc. graphically illustrating this behavior click the title link of this article. Notice that when the dollar broke support and nose-dived the week of March 16th, 2009(video) the US stock market reversed course from a downward slide leading to the current bull market(uptrend). Notice also that when the dollar started a rapid ascent in August 2008(3 day chart in the video) the stock market reversed course, ending a five year bull market(uptrend) from 2003 to 2008 leading to the market crash from August 2008 to March of 2009.

Am I predicting another stock market crash similar to the August 2008 to March 2009 correction(decline)? No, but the dollar technicals(charts) indicate that this may occur if the current bounce in the U.S. dollar turns into an uptrend. Remember that the trend of the dollar and stock marked are inversely related i.e. if the trend of one is up the other trend is down. A similar technical relationship exists between bonds and interest rates. If interest rates rise the value of bonds declines. Therefore I do not recommend buying bonds if interest rates are rising. By reading charts, turning points in trends can be spotted more easily.

Most analysts do not foresee a resumption of the dollar uptrend on a long term basis for several reasons. First, the US government is running the printing presses full throttle increasing the U.S. debt to levels that no one would have ever imagined just a few years ago. As the amount of money borrowed from the Federal Reserve Bank (private, not government owned) by the U.S. government increases, the likely hood of paying down the debt decreases leading to a lack of confidence that the U.S. government will be able honor its future financial obligations. Secondly, the more money put into circulation (increase in total credit) by borrowing from the Federal Reserve Bank, the more diluted the value of the dollar becomes leading to a decline in its value.

I highly recommend Worden Brothers software (Telechart) for trading stocks or mutual funds. I have used it for over ten years. You will make better trading decisions if you educate yourself by purchasing a few books on how to trade and how to read candle stick charts. Buying a stock or mutual fund without reading its chart and a few basic technical indicators is like driving a car blindfolded!

FREEDOM IN THE BALANCE

An American Call To Action!
(Click the title link then read the rest of this article.)
The Face of the Fascist New World Order
Coming to a climate near you! 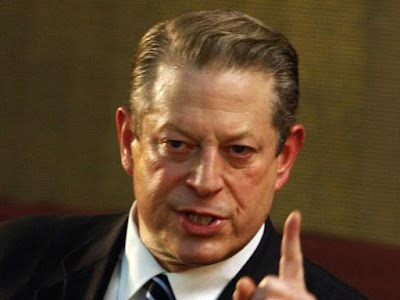 From Politico.com we read:

Former Vice President Al Gore, in town to promote his elegant new book "Our Choice," tells POLITICO's John F. Harris and Mike Allen that President Barack Obama SHOULD go to the climate conference in Copenhagen in mid-December, a question still being debated in the West Wing:

"At Copenhagen, we have to have a binding political agreement that the major countries -- both developed and developing, sign on to ... What is essential is that the outcome feel to the world community as if it's a major step forward."

Gore said he'll be in Copenhagen: ". ... I'm under no illusions that I'm anything but a private citizen outside the process. I will be making a speech to the meeting, and I will be having meetings with delegations that have asked me to come meet with them."

Asked if he thinks it's important for President Obama to go, Gore replied: "I think it is. ... I think he SHOULD go, simply because the stakes are SO high and, by the way, the U.S. has so much at risk because all around the world, the topic of conversation with regard to climate is: When's the U.S. gonna act? ... We're ... the natural leader of the world in the eyes of nations on every continent. And this is by far the most serious challenge the world's ever faced. ... I would hope that he'll go."

The corporate, government globalist Elite have every angle covered to push ratification of the global Climate Change Treaty by the United States in December. While the environmental fascist Al Gore urges Obama to attend the Copenhagen conference to ratify theIntergovernmental Panel on Climate Change Treaty, the Republicans on the U.S. Senate Environment and Public Works Committee don't even show up to the fight!
In another politco.com article: Climate bill passes without GOP we read the following:

The Senate Environment and Public Works Committee approved climate change legislation Thursday with no Republicans voting for the bill or even participating in the process.

Boxer said that she passed the bill “in full accordance with long-standing committee and Senate rules."

"This is not a procedure we wanted; it’s a procedure that’s available to us," said Boxer. “The majority has to be able to do its work…otherwise the whole Senate could come to a screeching halt."

"I am here to appeal to you and the members of the committee," Sen. Jim Inhofe, the top Republican on the committee, said in a brief statement. "In the history of this committee, we have not been able to find a time when the bill has been marked up without minority."