Vaccines: The Globalist Weapon of Choice

The occult globalists prefer a softkill weapon to a full frontal assault on the Ameirican population so that pharmaceutical companies and the government officials invested in them financially, can rake in obsene profits while thining the human population to meet their eugenics goals. I have illustrated this thought process below with a few notable quotes.

"In order to stabilize world population, we must eliminate 350,000 people per day. It is a horrible thing to say, but it's just as bad not to say it." - Jacques Cousteau

"The world has a cancer, and that cancer is man." - Merton Lambert, former spokesman for the Rockefeller foundation

"...The first task is population control at home. How do we go about it? Many of my colleagues feel that some sort of compulsory birth regulation would be necessary to achieve such control. One plan often mentioned involves the addition of temporary sterilants to water supplies or staple food. Doses of the antidote would be carefully rationed by the government to produce the desired population size." - Paul Ehrlich, The Population Bomb, p.130-131

"If I were reincarnated I would wish to be returned to earth as a killer virus to lower human population levels." - Prince Phillip, Duke of Edinburgh, leader of the World Wildlife Fund - quoted in "Are You Ready For Our New Age Future?," Insiders Report, American Policy Center, December '95

"A total population of 250-300 million people, a 95% decline from present levels, would be ideal." - Ted Turner - CNN founder and UN supporter - quoted in the McAlvany Intelligence Advisor, June '96

"Even though it is quite true that any radical eugenic policy will be for many years politically and psychologically impossible, it will be important for UNESCO to see that the eugenic problem is examined with the greatest care, and that the public mind is informed of the issues at stake so that much that now is unthinkable may at least become thinkable." [emphasis mine, Steve] - Sir Julian Huxley, first director general of UNESCO (1946-1948) 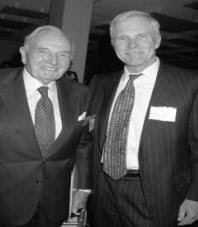 David Rockefeller with Ted Turner
Here is a video clip illustrating the dangers of being innoculated with a vaccine and the military cover-up to hide the perpetrators responsible for this reprehensible act.

Not only are experimental vaccines used on our troops who fight and spill their blood for everyone of us, but vaccines are also mandated for any child who wishes to enroll in a public school.

Here is a video presentation by David Ayoub, M.D. titled: Mercury, Autism, and the Global Vaccine Agenda. This is a must view if you wish to understand the globalist softkill eugenics program.

To determine whether one should trust statements made by the CDC, World Health Organization and vaccine manufacturers about the need for a new swine flu vaccine mass innoculation program we need to recall past history.

The Epidemic That Never Was

On the cold afternoon of February 5, 1976, an Army recruit told his drill instructor at Fort Dix that he felt tired and weak but not sick enough to see military medics or skip a big training hike.

Two weeks after the recruit's death, health officials disclosed to America that something called "swine flu" had killed Lewis and hospitalized four of his fellow soldiers at the Army base in Burlington County.

Only young Lewis died from the swine flu itself in 1976. But as the critics are quick to point out, hundreds of Americans were killed or seriously injured by the inoculation the government gave them to stave off the virus.

By mid-March, CDC Director Dr. David J. Sencer had lined up most of the medical establishment behind his plan to call on Ford to support a $135 million program of mass inoculation.

On March 24, one day after a surprise loss to Ronald Reagan in the North Carolina Republican presidential primary, Ford decided to make the announcement to the American public.

Congressional hearings were held in the spring and summer of 1976. Congress was told that the swine flu had not gone beyond Fort Dix and that only one death had been reported.

The president and his experts prevailed, however, and on Aug. 12 Congress put up the money to get the job done.(to mass innoculate the whole population, Steve)

By Oct. 1, the makers had the serums ready and America's public health bureaucracy had lined up thousands of doctors, nurses and paramedics to give out the shots at medical centers, schools and firehouses across the nation.

Within days, however, several people who had taken the shot fell seriously ill. On Oct. 12, three elderly people in the Pittsburgh area suffered heart attacks and died within hours of getting the shot, which led to suspension of the program in Pennsylvania.

Jersey pressed on with inoculations, however. Through the fall, even as more bad reports about the side effects of the vaccine came out, thousands of mostly older people in Greater Trenton lined up outside health centers, schools and firehouses to get the shot, sometimes waiting for an hour.

One of them was Lawrence's Mary Kent, a 45-year-old mother of two teenage boys who couldn't tie the ribbons on Christmas presents only days after she got her shot at the Trenton War Memorial in early December.

On Dec. 16, increasingly concerned about reports of the vaccine touching off neurological problems, especially rare Guillain-Barre syndrome, the government suspended the program, having inoculated 40 million people for a flu that never came.

Things are much different now however than in 1976.

For starters this swine flu is not a naturally occuring virus but has been genetically engineered and hence can be considered a softkill bioweapon used against the world's population.

In late April, sources close to investigative journalist Wayne Madsen reported that the outbreak of swine flu was the result of the introduction of a human-engineered pathogen capable of producing a widespread global pandemic. "A top scientist for the United Nations, who has examined the outbreak of the deadly Ebola virus in Africa, as well as HIV/AIDS victims, concluded that H1N1 possesses certain transmission 'vectors' that suggest that the new flu strain has been genetically-manufactured as a military biological warfare weapon," Madsen reported.

"Our best intelligence estimate is that pandemic Avian Flu has already been created through genetic engineering in the United States, fusing the deadly genome of the 1918 Pandemic, misnamed the 'Spanish Flu', with the DNA of the innocuous H5N1 virus in a growth medium of human kidney cells, according to the National Institutes of Health and the vaccine’s manufacturer. Some virologists believe that this would insure that the man-made mutant virus recognizes human cells and knows how to invade them," writes Rima E. Laibow, MD, head of the Natural Solutions Foundation, a citizen watchdog group monitoring the pharmaceutical industry.

Also this time FEMA and DHS are planning for mass graves and crematoriums. The Department of Homeland Security did not exist in 1976.

In late 2007, the Bush administration issued a 'directive' establishing a "National Strategy for Public Health and Medical Preparedness" based on Biodefense for the 21st Century. Prior to this, in May of 2007, the U.S. military had the foresight to "plan for a possible avian flu pandemic that could kill as many as three million people in the United States in as little as six weeks," according to Yahoo News. Guidelines and "planning assumptions for US military services and combatant commands" were published in a document entitled Implementation Plan for Pandemic Influenza."

"Possible scenarios include US troops being called in to put down riots, guard pharmaceutical plants and shipments, and help restrict the movement of people inside the country and across its borders," Yahoo summarizes.[yahoo link is no longer active, Steve] "The plan envisions fast moving, catastrophic waves of disease that would overwhelm health facilities and cripple the ability of state and local authorities to provide even basic commodities or services."[emphasis mine, Steve]

Perhaps this is why in 2002 the Pentagon reorganized the army's theater of operations to include the United States, creating the North American Command (NorthCom) signifying use of army, battle hardened combat brigades for use against American civilians. See the video clip below.

According to Paul Watson:

Batches of swine flu vaccine destined for Europe are being fast-tracked through safety procedures and there will be no testing on humans whatsoever before millions of people, starting with children and pregnant women, are inoculated as part of mass vaccination programs.

Despite warnings from World Health Organization flu chief Dr Keiji Fukuda about the dangers of untested vaccines, GlaxoSmithKline and other pharmaceutical companies like Baxter, will begin shipping the vaccine to governments in Europe within two months.

Officials claim that the swine flu vaccine has similar ingredients to the avian flu vaccine and is therefore safe. In that case, we better hope that the vaccine does not have the same ingredients as batches of Baxter’s bird flu vaccine, which were actually contaminated with the live avian flu virus and shipped out to numerous European countries.

In addition, the swine flu vaccine will contain an ingredient known to cause debilitating diseases.

As we reported last week, the shots will include the ingredient squalene, which has been directly linked with cases of Gulf War Syndrome.

According to award-winning investigative journalist Gary Matsumoto, there’s a "close match between the squalene-induced diseases in animals and those observed in humans injected with this oil: rheumatoid arthritis, multiple sclerosis and systemic lupus erythematosus."

"There are now data in more than two dozen peer-reviewed scientific papers, from ten different laboratories in the US, Europe, Asia and Australia, documenting that squalene-based adjuvants can induce autoimmune diseases in animals…observed in mice, rats, guinea pigs and rabbits. Sweden’s Karolinska Institute has demonstrated that squalene alone can induce the animal version of rheumatoid arthritis. The Polish Academy of Sciences has shown that in animals, squalene alone can produce catastrophic injury to the nervous system and the brain. The University of Florida Medical School has shown that in animals, squalene alone can induce production of antibodies specifically associated with systemic lupus erythematosus," writes Matsumoto.

Micropaleontologist Dr. Viera Scheibner, who conducted research into the adverse effects of adjuvants in vaccines, wrote the following about squalene.

Before you accept any innoculation, especially a government hyped mass innoculation remember to ask yourself: What is coming through that needle?

When the swine flu vaccinations of the population begin in a few months think about what you have just learned. Is the swine flu worse than the vaccines side effects?