THE DECLARATION OF INDEPENDENCE HAS BEEN REPEALED!* 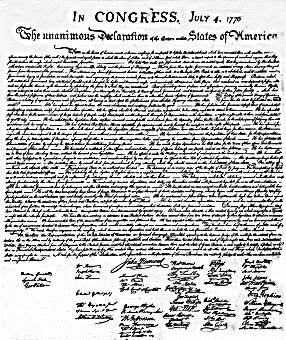 "On April 2, 2009, the work of July 4, 1776 was nullified at the meeting of the G-20 in London. The joint communique essentially announces a global economic union with uniform regulations and bylaws for all nations, including the United States. Henceforth, our SEC, Commodities Trading Commission, Federal Reserve Board and other regulators will have to march to the beat of drums pounded by the Financial Stability Board (FSB), a body of central bankers from each of the G-20 states and European Union...

The head of the Financial Stability Forum, the precursor to the new FSB, is Mario Draghi, Italy's central bank president. In a speech on February 21, 2009, he gave us clues to his thinking. He noted that 'the progress we have made in revising the global regulatory framework...would have been unthinkable just months ago'...

Obama, perhaps feeling guilty for the US role in triggering the international crisis, has, indeed, given away the store."

In the words of Hillary Clinton, "Never waste a good crisis" to move the world government agenda forward.

"Now we may no longer look to presidential appointees, confirmed by the Senate, to make policy for our economy. These decisions will be made internationally. And Europe will dominate them. The FSF and, presumably, the FSB, is now composed of the central bankers of Australia, Canada, France, Germany, Hong Kong, Italy, Japan, Netherlands, Singapore, Switzerland, the United Kingdom, and the United States, plus representatives of the World Bank, the European Union, IMF(International Monetary Fund), and the Organization for Economic Co-operation and Development(OECD).

Europe, in other words, has six of the twelve national members. The United States, with a GDP three times that of the next largest G-20 member(Japan), will have one vote....The Europeans have been trying to get their hands on our financial system for decades. It is essential to them that they rein in American Free Enterprise so that their socialist heaven will not be polluted by vices such as the profit motive. Now, with President Obama's approval, they have done it!"