Humpty Dumpty Had a Great Fall, All Bernanke's Horses And All of Paulson's Men Couldn’t Put Humpty Together Again! 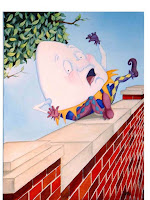 Each time the government has come out with a new great idea for saving the financial markets, it has given it a new name with a new twist.

But They All Backfired, and the New U.S. and European Plans Announced Yesterday Are No Different.(emphasis in original)

In August 2007, when central banks injected hundreds of billions in new liquid funds into the banking system, and again, in March 2008, when the Federal Reserve rescued Bear Stearns, their goal was essentially the same as today’s: To boost investor confidence.

Initially, they did. Among other things, investors bought more shares in insolvent banks, invested more in junk bonds of overrated corporations, and placed more bets on shaky derivatives. But that did not end the debt crisis. It only made it worse.

The main reason: Even while authorities were dumping liquidity onto the markets from above, the fires on the ground continued to rage. More homeowners fell behind on mortgage payments. More credit cards, auto loans and student loans went bad. More bank balance sheets crumbled.

Before long, investors realized they’d been duped. They fled in panic. And the debt crisis returned with a vengeance. Instead of restoring realism, the authorities created a fantasy. Rather than bringing stability, they fostered instability. Inadvertently, they helped create the very panic they sought to prevent.

The same thing is going to happen again this time.

The government, despite all its power, cannot repeal the law of gravity to stop investors from selling. Nor can it turn back the clock to magically reverse the nation’s financial sins.

Looking further into the future, there will be many reasons to expect a recovery. But first the economy will suffer a great fall.

Humpty Dumpty Had a Great Fall, All Bernanke's Horses And All of Paulson's Men Couldn't’ Put The World Financial Structure Back Together Again![Steve]

This investment news is brought to you by Money and Markets. Money and Markets is a free daily investment newsletter from Martin D. Weiss and Weiss Research analysts offering the latest investing news and financial insights for the stock market, including tips and advice on investing in gold, energy and oil. Dr. Weiss is a leader in the fields of investing, interest rates, financial safety and economic forecasting. To view archives or subscribe, visit http://www.moneyandmarkets.com.

Steve
This article may be reproduced WITHOUT CHANGE and in its entirety for non-commercial and non-political purposes. This blog is not affiliated with www.christianobserver.org.

thechristianobserver.blogspot.com
Posted by steve at 11:00 PM